Back from the land

We spent all last week in Los Angeles and used two days to explore all of Disneyland, Downtown Disney and California Adventure. This week, I've tried to play catch up at work and home. I'm still behind in both areas, but felt I had to catch up a bit on my blogging! 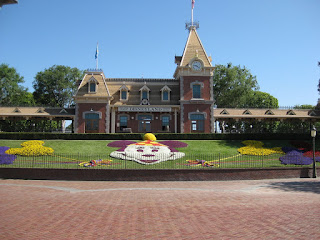 I'm so glad I had the opportunity to go to Disneyland- the original Disney park. There were so many emotions to experience! Excitement, disappointment, exhaustion, claustrophobia, silliness, frustration, happiness, love, nostalgia... so many! There are so many similarities and so many differences between DL and WDW. First, the castle. Poor Sleeping Beauty. She got the wrong end of the deal when it comes to castles. Cinderella's is so much bigger, beautiful and majestic. I guess Walt did the best he could in 1955 with the money he had! The layout of Magic Kingdom and DL are similar. However, you can tell the imagineers made some changes in Orlando to help with flow and crowds. The walkways and paths in DL were smaller and it was harder to get around the park. It seemed like several areas at DL were "afterthoughts" because of the layout. I guess there's a good chance that they were "afterthoughts" as Disney acquired more land to build additional lands, and attractions. The queues in WDW are much better themed to help tell the story of the attraction. However, several of the rides at DL are better than those at WDW: Space Mountain, Pirates of the Caribbean, It's a Small World, California Screamin (better than Rockin Roller Coaster at DHS) and Toontown. 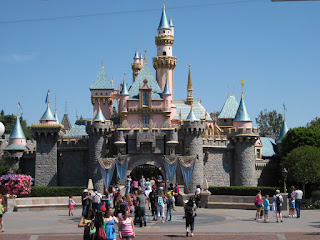 I'll continue my thoughts about Disneyland over the next few weeks and share some of my photos. I just wanted to post something tonight!
Posted by adisneymomsthoughts at 9:33 PM