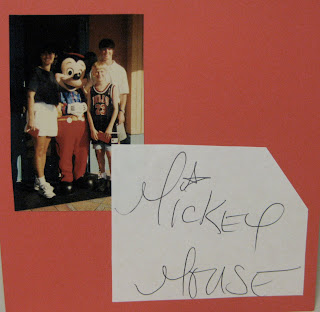 I think I "meet" Mickey every time we go to Disney World and Disneyland! I have multiple photos of me, my family and friends with Mickey Mouse. This particular photo was taken at then, MGM Studios, in June of 1996 with my 2 brothers, Paul and Mark. I chose to go to Walt Disney World with my family for my college graduation trip. This was the trip the autograph collecting was born. The guy I was dating at the time could not come with us on the trip, so I collected autographs from the characters to give to him as his WDW gift. A few months later, when we broke up, I was so mad that he had all those wonderful autographs! So, from that point on, I was determined to "remeet" all those characters and get my own autograph from them! This autograph and photo were not from the same trip. I don't remember when or where the autograph came from, other than Walt Disney World! I do know the photo was taken on our very first trip to WDW in 1983. My mom may remember what month it was- I don't! We were in the Magic Kingdom on Main Street. My brother Paul and I were meeting several characters that day. I do remember that the characters were all around and there was usually no line! Boy, how things change! I do like how the 1983 Minnie seems much more "furry" than the 1996 Mickey does!!
Posted by adisneymomsthoughts at 9:27 PM