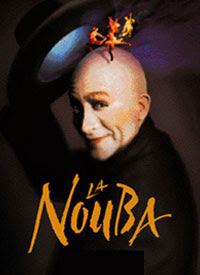 Many years ago, while I was at Walt Disney World, I wanted to see La Nouba. La Nouba is a show at Downtown Disney on the West Side. La Nouba is a theatre style show that requires a ticket to see, but not a WDW Park Ticket. I had seen a few other Cirque Du Soleil shows and wanted to compare this show to the others. However I wasn't willing to spend the extra money on a ticket! Now, in 2010, they are $84 a person... So, I did what I do for Auburn football games. I hung out around the entrance to see if anyone was wanting to scalp a few tickets! With no luck, we started to leave. We were walking around the side of the building and a man asked if we were seeing the show. I told him we weren't because we didn't get tickets. He asked if we wanted to see it and and I answered yes. He then told us his wife's plane was delayed and they weren't going to make the show so we could HAVE his tickets!! He told us to have fun and literally ran off to pick up his wife!

We went in and had great seats about 12 rows from the front. The show was mesmerizing! If you don't know what La Nouba is, don't expect anything "Disneyish" from this show. There are no characters and nothing "Disney." This show is a combination of acrobatics, gymnastics, music, and pure talent! There isn't really a story line, so don't expect that. Don't expect a circus either, because it's not really a circus! This show could compete with anything on Broadway- music, lights, sounds, sets, costumes, etc. If you enjoy theatre and creative acts, you should enjoy La Nouba. An excerpt from the program might help you,

"Once upon a time, a door opened and two worlds collided. Dreams clashed with reality. The mundane mixed with the marvelous. It was no longer possible to tell where one world began and the other ended. This new place was called La Nouba."

Posted by adisneymomsthoughts at 8:03 AM