Have I told you the story about how my penny collecting started at Disney World?

Honestly, it started as a kind of joke. My friend Heath and I were visiting the World with my family at the end of December 2001 to ring in 2002. We were having so much fun! We continuously saw people with the pressed penny albums. We immediately made fun of them... who would spend roughly $10 on a penny album? There are so many "better" Disney souvenirs out there!

On one of our Epcot days we all split up into groups. Mark, Paul and Lisa. Me and Heath. Mom and dad. We had cell phones at this time, but didn't want to pay roaming charges, so none of us had our phones with us in Orlando. So we just had to wait for the 6:00 dinner time to meet up again- unless we happened to run into each other at the park. I believe it was around lunch when Heath started to feel sick. He wanted to go back to the room at the All Star Sports and take a nap. I didn't, so he left me at Epcot by myself and he went to take a nap. So, for the next 5-6 hours, I was solo at Epcot. At times it was fun to do whatever I wanted without having to consult someone else, but at the same time it was not fun experiencing all the Epcot wonder by myself!!

At 6:00 when we met back for dinner at the Garden Grill, Heath showed up. He wasn't feeling bad anymore, physically! He was feeling bad for leaving me by myself at the park, so he brought me a surprise. Wanna guess what it was? Yep. My very own pressed penny album! 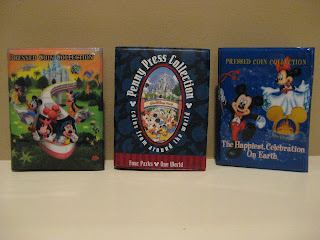 (The one from Heath is the middle one!)
I now had this wonderful empty pressed penny album that had to be filled, so the hunt began! As soon as dinner was over we went to the Magic Kingdom. While the rest of the family was visiting attractions, Heath and I literally ran through the park looking for the machines! We learned quickly that you can find them at the exits of rides and gift shops. They are in other places too, but those were the top spots to find the machines! We were getting dollar bills changed out to quarters and dimes and nickels changed out to pennies quickly! It's amazing how quickly you run through money when you are scrounging for 51 cents in 2 quarters and 1 penny! Heath's pennies were building up in his pocket, so guess what time it was?! Time for Heath to get his OWN pressed penny album!
Once we were home from the trip in 2001-2002, the penny hunt continued. To this day, every time I see a pressed penny or squished penny machine I get 2- one for me and one for Heath! My collection has grown into pennies from around the world and I don't mean the World Showcase! The youth from my church bring back quished pennies from their travels too!
Here are all my "other travels" penny albums... however they are not all full, YET! 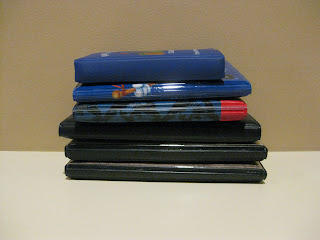 And here are all my Disney World and Disneyland pennies and a few WDW quarters: 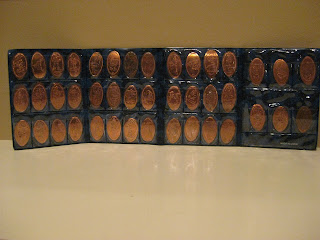 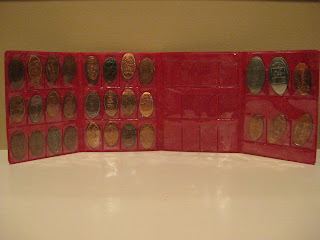 I can't wait until the December trip so I can try to find NEW pennies to add to the albums!!
Posted by adisneymomsthoughts at 11:03 AM