I met Timon and Rafiki while I was at Walt Disney World in January of 2003 to run the full marathon with Team in Training. I went with my friend Deb (far left) and the other girl, Karen, was in our training group. We were in the Magic Kingdom during our free days prior to the race when we met Timon on Main Street USA. I already had Rafiki's autograph from a prior trip (see below), but Timon was posing with Rafiki for our picture so I got the shot with both Lion King animals and Timon's autograph! 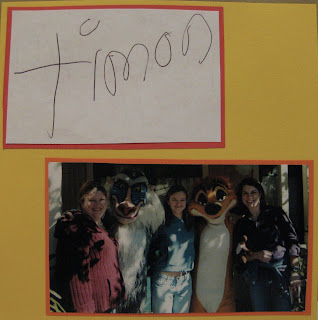 I first met Rafiki on a trip to Walt Disney World in 1998. This was in my former life- for those of you who know me, you can probably figure out who I was vacationing with... I met Rafiki at then, MGM Studios, right as you enter the main gate. I think his autograph is my favorite of all the characters! It has such "character!" 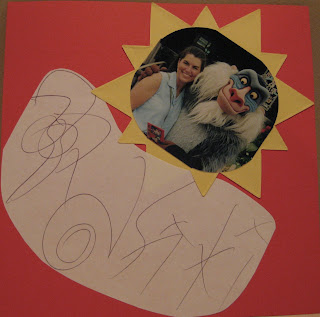 I've never seen Simba or Nala at Walt Disney World, or Disneyland for that matter. Do you know if you can actually "meet" them or can you only see them at The Festival of the Lion King at Animal Kingdom?
Posted by adisneymomsthoughts at 11:13 PM