Ways to keep it going for Cman...

Remember when I did this post on "ways to keep it going"? I shared ways to keep the magic alive once you return from Disney. We have Disney magic hiding all through our house. After I posted the pictures I even found additional magic that I forgot about! In that original post, I didn't post Cman's room because he was sleeping. So, recently I remembered to photograph his room to share some of the magic that is in there. 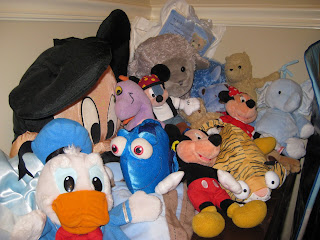 Here are some of the Disney stuffed animals in Cmans room. You can see a big Mickey head pillow I got on sale for $3 at a toy store going out of business! There is also a Mickey and Minnie "beanie baby" that was found a Walgreens for half the price of the same stuffed animals in the parks! Notice the Mickey pirate from the Pirates and Princess Party at the Magic Kingdom. There is also a Dori fish from Finding Nemo, a classic Pooh bear hiding in the back and a Donald Duck hand puppet in the front. However, I think my favorite animal hiding in the bunch is Figment! He was a purchase I made on our trip in 1983! I had just been on Journey to Imagination for the first time and FELL IN LOVE with Figment!! 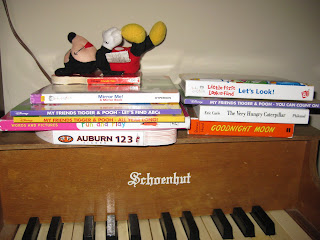 These are just a few of the books we have on Cmans "piano" that we read on a daily basis: Disney's Friendly Tales about the Fab 5 going to the beach with a mini Mickey stuffed animal attached (this was JAGs when he was a kid), several Baby Einstein books with Violet and Jane, and some Tigger and Pooh books found in the dollar bins at Target. These were the only ones that made it into the photo. Cmans favorite book is the Birnbaum guide to WDW! He loves to look at the photographs of the characters and name them... or at least find them when I say the name of each character! 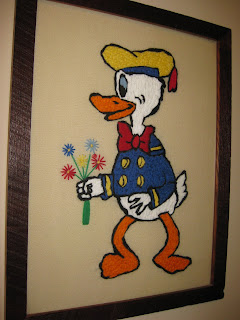 This is Cman's favorite character~ Donald Duck! Mostly because he can say "duck" so clearly and everyone knows what he's saying! This was in JGs room when he was a child. Mimi made it in the 70s! 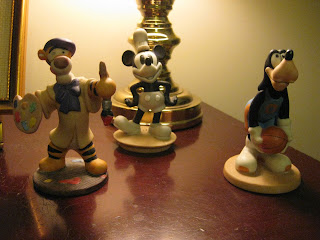 These figurines were passed down from Uncle Mark. I guess he outgrew them!! Cman loves Tigger. He calls him 'grrr' which is his word for Tiger! Thanks Mark!
Posted by adisneymomsthoughts at 10:44 PM