A Little Bluebird Once Tweeted... 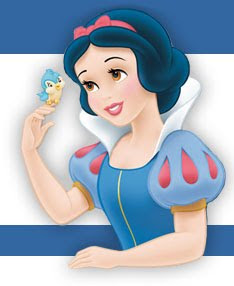 We hope you’ll “like” a three-day social media celebration. One that will leave you Happy, not Grumpy. And like the Seven Dwarfs’ cottage, space will be limited. Please don’t reply today. (A more formal invitation will come soon that will be nothing to Sneeze at.) We promise that “someday, more hints will come.”

Please do not reply to this email, it is only an announcement of the conference dates.

Ever since I opened this email, I have been extremely anal about checking my email. I didn't want to miss the "next email" about registration details. Every morning when I woke up, the first thing was to check my phone for new messages, the last thing each day before bed was to check for new messages. I would even check my phone in the middle of the night when I got up with my son, just to make sure I didn't miss it. On our trip to WDW last week, I checked my messages religiously since I knew the term "later this fall" was coming to an end. I even brought my laptop with me on the trip, just in case I had to register while on vacation.

Then, on Monday Dec. 6, the day after we returned, I read the following post on Chip and Company:

What you are about to read may be considered controversial. I debated long and hard prior to writing this post since I often don’t write things that could be perceived as critical of Walt Disney World. And, I would like them to invite me
to an event in the future. That being said, this recent story was a big one in
the social media community and I felt it needed to be covered. So, here it is.

Tensions were running high in the social media world this past Friday. So much so that #disneysmmoms became a trending topic on Twitter. So, what’s all the hullabaloo about? The 2011 Disney Social Media Moms Celebration. In 2010,
the inaugural celebration was invitation-only and brought mom bloggers and
top-notch speakers together at Walt Disney World. More than your typical
conference, the Disney Social Media Moms Celebration allowed attendees to bring
their families to share in the magic. A couple of lucky attendees even had the
opportunity to spend a night in Cinderella Castle.

Invitations to the 2011 event were coveted by bloggers everywhere but soon the word spread on Twitter – the 2011 Disney Social Media Moms Celebration would open registration to all social media moms! For only $375, attendees would spend a long weekend at Walt Disney World and at the Grand Floridian, no less. It gets even better, 7-day park hopper passes and some meals would be provided for the attendee and up to three family members.

So How Did Something So Right Go So Wrong?
The “Save the Date” email stated that space was limited and registration was
on a “first come, first registered basis.” You can imagine the buzz for this
event and the number of bloggers anxiously awaiting specifics on registration.
In late November, the official announcement came and once again the #disneysmmoms hashtag was active on Twitter. Registration would open on
Thursday, December 2 at 2pm ET. The announcement included the information that
needed to be provided during registration which included the basics, and then
some information on the registrant’s social media presence such as website name,
website traffic, Twitter name, number of Twitter followers, etc. As far as I
know, no eligibility requirements or exclusions were listed.

If Twitter is any indicator, moms across America were anxiously waiting at their computers well before 2pm ET to be sure they were one of the “first registered”, thus securing them a spot at this conference. Registration opened and was plagued
with problems from the start. Hopeful attendees reported on the spinning orange circle that refused to let them into the registration site. Other bloggers reported that they accessed the registration page only to be promptly “kicked” out. Frustrations quickly mounted. So much so that the Disney SM Moms Twitter account sent out the following message at 2:13pm.

“There is high traffic on the server. The site IS operational and we are getting registrations so keep trying!”

Near the 3pm hour, more reports of people getting registered trickled in. After providing payment information, registrants received a registration acknowledgement saying, “Thank you for your registration for the Disney Social Media Moms Celebration at Walt Disney World Resort. We are currently reviewing your registration. All registrants wil be verified prior to registration confirmation.” The acknowledgement referred to verification but I think it’s safe to say that applicants assumed it meant the Disney Social Media Moms Celebration team would make sure the bloggers were who they said they were.

Friday, 2pm. Confirmation emails were being sent out.

Shortly after 2pm, excitement turned to disappointment, bitter disappointment in some cases. Turns out many registrants were being sent an email saying that the conference was filled before their registration could be confirmed. Reactions on Twitter and Facebook ranged from “WHAT?” to sentiments I can’t print on a family friendly blog. I don’t think this was the press Disney World was looking for.

So What’s the Problem?
Credit card information was accepted (though not charged) during the registration process and acknowledgement emails were sent. In fact, the email said, “Your Credit Card information is used to hold your registration spot until your information can be verified.” It did not say, “We registered more people than available spaces and you may not be able to attend.”

Reports of people who were confirmed but registered AFTER others who were sent the “conference is full” email were rampant in the blogosphere. People felt the process was unfair and lacked transparency. Were there criteria for attendance that was not disclosed? How could people who registered in the 2pm hour be denied attendance when registration wasn’t closed until after 4pm? What happened to “first come, first registered?”

I’m not a conspiracy theorist and I don’t know what happened but I do know that there are a lot of hard feelings out there and that’s not good for a company I love. So, in the spirit of helpful suggestions, here’s my take on how Disney could have improved the registration process for the 2011 Disney Social Media Moms Celebration.

Upgrade Your Servers. It shouldn’t have come as a surprise to anyone, let alone those in social media, that the response to the open registration would be overwhelming. Once the decision was made to open the registration to all bloggers, the Information Technology department should have ensured their network infrastructure could support the demand. Stress mounted when bloggers were faced with the orange circle of doom that kept spinning as they tried to access the site to register.

Set Expectations. This is one of the first lessons I learned in my professional life and it has served me well. Don’t promise something you can’t deliver. If registration was not truly first-come, first-registered, don’t say it is. If you’re going to accept more applications than spaces, be upfront about it. If there was a mistake or technical glitch, own up to it. It’s my experience that people are very understanding if they know the rules of the game before they play.

Wait List. I can understand Disney wanting to have maximum attendance at the event and there may be instances where registered attendees cannot be verified (that is they are not who they claim to be) so Disney needs to be able to fill those spaces. My county parks system has a successful wait-list system. If they can do it, it should be trivial for a company such as Disney to implement one.

Publish Criteria and Exclusions. If there were criteria for the conference, and I don’t know that there were, it should have been published well in advance. If you’re not
eligible for something, you’re not going to apply. Mom bloggers wouldn’t have
been left with a sense that they, and their blogs, had been personally rejected.

Did you apply for the Disney Social Moms Media Moms Celebration? What was your experience like and do you have any suggestions for next year’s process?

If you will be attending this event, congratulations! We would love to hear about your experience when you return from the conference.

Well, that stinks. I was in WDW when reigstration opened, but never got word about it. Looking back, I'm not sure I could have spent 2 hours away from my family and the conference I was attending. Maybe I'm too new to blogging and tweeting to really benefit from this social media mom's conference anyway. Who knows. Oh well. It's over and I can stop checking email so much!

Thanks for letting me get that off my chest!

Posted by adisneymomsthoughts at 5:39 PM