Saturday, December 4, 2010
Today was our last day at the World. It was sad to be spending it at MGM or Hollywood Studios instead of the Magic Kingdom. I always like ending my trips at MK so I can get that one last glimpse of the castle at the end of Main Street as I walk under the train tracks. Once upon a time, MGM was my favorite park. Now it ranks #4, even though 3 of my favorite rides are there- go figure. 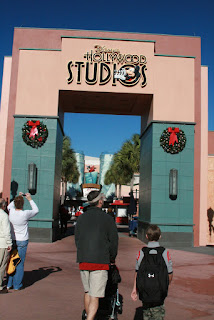 We slept in, until 7:30, and got to the park around 10. It had been open for a while so crowds were picking up. We went straight to Toy Story Mania and the standby wait was 80 minutes... the fastpass return was for 6:10PM! Needless to say, we snatched up fastpasses and went on our way. We wandered over to Tower of Terror and there was a 40 minute wait there. Since it was 10:30 and we had 11:30 reservations for lunch at House of Blues at Downtown Disney, we decided to start our trek to DTD. Since you can't take a bus from a Park to Downtown Disney, we detoured to Pop Century first- then caught the bus to DTD. It was a good thing since JG realized he failed to put on deodorant. We picked that up at the Pop gift shop!
Things were pretty slow at Downtown Disney. We had time to leisurely walk from one end of Marketplace to House of Blues on the far end of West Side and make our 11:30 reservations. The whole reason we ate at House of Blues was because I was able to get a $25 gift certificate for $2 on Restaurant.com last fall. It was a great meal and fairly cheap because of the gift certificate. Once we finished lunch, we walked back to Marketplace through Pleasure Island. We stopped to take in the Characters in Flight Balloon Ride, T-Rex restaurant, the Lego creations and the new restaurants that took the place of McDonald's. We did some shopping at World of Disney and Team Mickey. I also found my traditional souvenir, a WDW Christmas ornament at the Days of Christmas store. To get back to Hollywood Studios, we took a bus to Saratoga Springs and hopped on a DHS bus. We were back at DHS around 2. 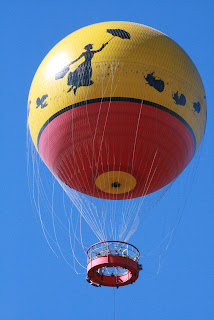 Characters in Flight balloon ride at Downtown Disney. This is on my bucket list... we didn't have enough time this trip. 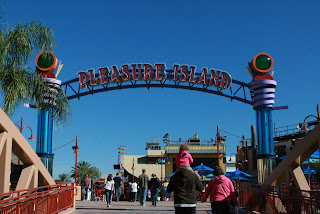 One last shot of Pleasure Island before they change it to Hyperion Wharf. Bitter sweet.
When we got back to DHS, we went strait to Tower of Terror and Rock 'n' Roller Coaster. C-man took a nap, I peopled watched and JAG and daddy rode the ToT. Rock 'n' Roller Coaster was temporarily shut down. After we finished Sunset Boulevard, we made our way to Starring Rolls Cafe to get cupcakes! I was very pleased with my selection! 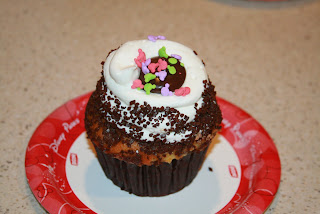 My chocolate vanilla mix cupcake from Starring Rolls- I can't remember the actual name of the cupcake, but it was GOOOOD!
After our cupcake sugar high, we went exploring! We all rode the Great Movie Ride and were able to see the Cowboy scene. I like that one better than the Gangsters, so I was pleased! We took in Playhouse Disney and C-man LOVED it! That was one of my highlights! His face was priceless and his dancing was amazing! :) We walked through One Man's Dream and I cried at the movie. We made our way back to Toy Story Mania in time for our fast passes. At 6:10, the standby wait was 100 minutes!! By the time we got off the ride the wait was still 100 minutes and the park wasn't even opened for 100 more minutes! CRAZY!! Once Toy Story Mania was out of the way we walked through the Osborne Spectacle of Lights and went back to Rock 'n' Roller Coaster for the boys to ride. It was a good ride to end on! We missed our dinner reservations at Hollywood and Vine at 5:45 because of our fastpass return for Toy Story Mania. That was sad because I was looking forward to eating there. Again, there is always next time! 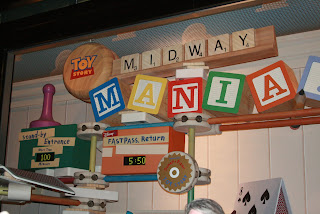 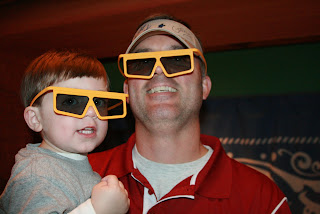 Daddy and C-man ready to ride! 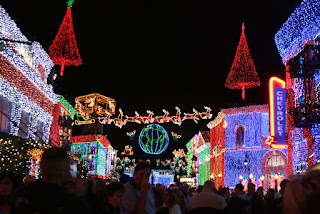 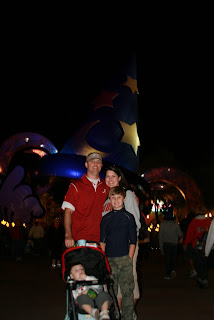 Good night from Hollywood Studios, or as I still call it, MGM.
We got back to the hotel around 9:00 and were all hungry! We decided to eat at the Pepper Market at Coronado Springs. This was probably the best meal we had the whole trip! It's laid out in stations: Grill Station, Chef's Station, Market Station, Hot Sandwich Station, Pasta and Pizza Station and Kids Kitchen. All of us were able to choose which station we wanted to eat from and fill up! C-man and I had pasta, JAG had a burger and daddy ate from the Chef's station. Everyone was happy, full and tired at this point! We went back to the room, started packing our stuff and got a decent nights sleep before our ride home the next day.
And another great perk for this day was that AUBURN WON THE SEC CHAMPIONSHIP GAME! Mom was texting me updates all afternoon. I was wearing my AU sweatshirt and of course Jonathan was wearing his Alabama golf shirt. We got several comments from people who know the AU/ Bama rivalry. It was fun, Auburn won and we are Glendale Bound for the BCS National Championship Game! War Eagle! Beat Oregon!
Over all, this was a great trip! I learned some new things at my conference, C-man got to experience Walt Disney World and we made great memories as a family. I have a list of regrets and things I wish I had done differently, but that's another post and another trip! :)
Posted by adisneymomsthoughts at 9:44 PM