Good Luck to all the runners at Walt Disney World this weekend for the races!

What great memories you all will be making to help "Let the Memories Begin!"

I've blogged in the past a little about my marathon experience(s), but didn't go into much detail and didn't post the horrific photos... until now! :)

I ran finished the full marathon in 2003 with my friend Deb and Team in Training with the Cancer Society. I trained like I was supposed to from September until November. I logged the miles I should have and drug (or is it dragged?) my dog along for a lot of my runs! When I was out for one of my 13 mile training runs in the middle of training, my shin splints were so bad I could barely walk, much less run. I abandoned that run and set up an appointment with my doctor. He told me to lay off a week, take some anti-inflamatories and rest. I did, no good. After several weeks of doctor's appointments, physical therapy and eventually a bone scan, we found that I had stress fractures in both shins. My training stopped and the doctor said not to run the race. That was not an option, so I just stopped running and wore a boot for about 4 weeks. I never ran more than 13 miles in my training due to my shins. I showed up in Orlando at the beginning of January for the race. I had not run at all since early November, 2 months prior. Oh well. That didn't stop me! Deb and I spent a few days in the parks with our friend Karen before the race. We played a lot, met a lot of characters, rode fun rides and had an over all good time. I think the most fun was when we were "allowed" to go into Epcot for the pre race meal without a park ticket. After the meal, I'm not sure how now, instead of leaving to go back to the resort, we stayed to play more! We had our pre race stuff which included bananas. We used those bananas as telephones in one of our MANY test track photos! Fun Times!

Many of the following photos were from photopass photographers- before they blocked you from right click, copying photos on the internet! Sorry if they are small and grainy! 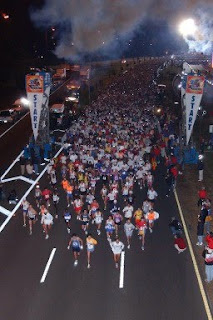 The start! At this point, I'm still about a 20 minute walk behind these guys! 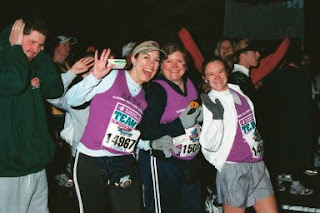 Still not to the starting line. We're walking to get there from our coral! 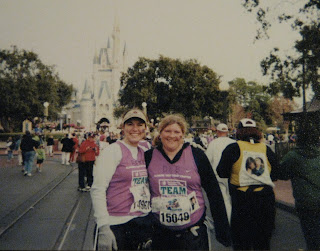 Deb and I had a park guest take our photo in front of the castle during the race with my camera.
We had walked up to this point and Deb got sick on the other side of the castle, so I left her and started my run/ walk for the remaining 16 miles. 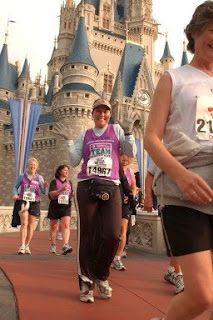 Going through the castle- still haven't shed any layers. It was pretty cool that morning. 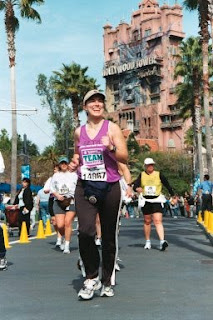 Many, many miles later running down Sunset Boulevard in MGM. Yes, I wore a fanny pack. I think this is the one and only time I have. I had my camera, cell phone, "goo", lucky charms from my students, snacks, etc all tucked in my pack! :) 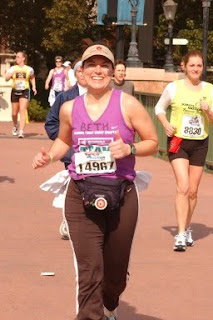 I think this was running through Epcot's World Showcase, but I'm not 100% sure. Notice all the layers are off now! It was quite warm at this point. Luckily, my mom was a spectator, and since I had my cell phone in my fanny pack, I would call her and tell her where I was so she could meet me and collect my clothes and such! 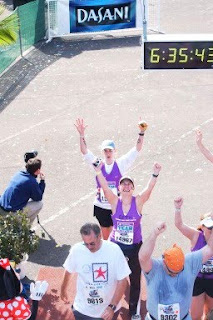 Yes, I look horrible, but I finished and got my medal! 6:35 was the finish time, but not my chip time. I think my official time was 6:04- or something like that. Not too bad for walking majority of it... at least that's what I keep telling myself. ;) 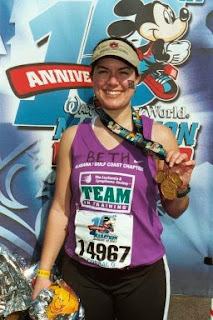 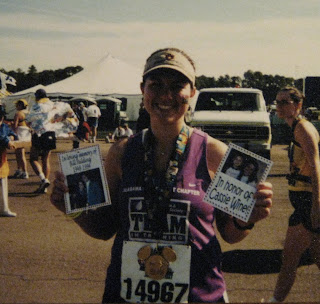 The signs I had pinned to my back the whole time. "In honor of Cassie Wine" and "In loving memory of Bill Yeilding 1948-1994." Cassie was a young friend of Deb's who was battling cancer. She died shortly after the race. Bill was my uncle who fought Lymphoma for almost a year.

We know that both Cassie and Bill are in a much better place, they aren't sick and they don't suffer. We miss you, but will be with you again one day in GLORY! We love you.
Posted by adisneymomsthoughts at 9:59 AM