I had someone ask specific questions about "Fastpass" earlier this week, so I thought I'd blog about it...

Fastpass is exactly what it sounds like- a way to fastpass the lines. If you have a ticket to any of the 4 WDW parks, you have access to fastpass. Not all rides have fastpass. Here's the list of rides, by park, that offer fastpass (according to the WDW web site):

Animal Kingdom
Hollywood Studios
When you approach one of the attractions listed above look for the "Fastpass Distribution" sign near the entrance. It will look like this: 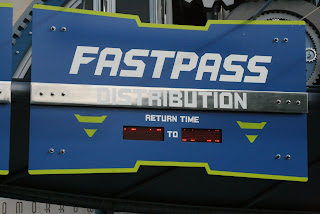 On this sign you will find a return time listed. This shows the hour window you can come back and ride the ride using the "fastpass line." If you choose to get a fastpass ticket for this hour window, you can come back at any time during that hour and ride. You will be able to bypass the standby line using the fastpass line and get to the ride in a much shorter time. You can not request a specific return time. You have to take what the machine gives you.

When you choose to get the fastpass ticket, you need to insert your park ticket into the machine. Your park ticket can be your resort ticket, your annual pass, resort hotel key card, your cast member ID card, or a readmission ticket (not sure what that is, but it was listed on the Disney web site!). The machines look like this: 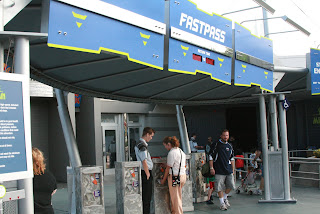 Once you insert your park ticket, your fastpass ticket will come out with your return time printed on it- that way you won't forget! Once you have this fastpass ticket in your hand you can go to another part of the park until it's time to return. Don't lose this fastpass- it can't be replaced!! 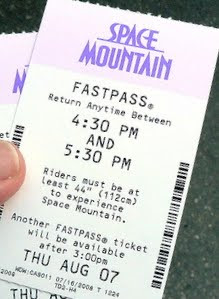 When it's time for you to return you need to look for the "Fastpass Return" sign. This will be where you need to enter. Have your fastpass ticket ready to give to the cast member so you can enter the fastpass line with minimal wait! 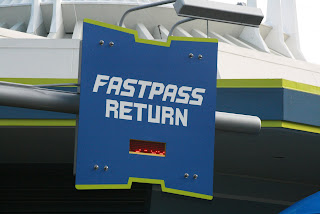 A few things to consider when getting a Fastpass:
Do you have additional suggestions for the use of fastpasses?
Posted by adisneymomsthoughts at 10:11 PM