The Pirate and Princess Party was a special event ticket similar to Mickey's Not So Scary Halloween Party (MNSSHP) and Mickey's Very Merry Christmas Party (MVMCP). In 2004 the cast members at MNSSHP noticed how many of the children attending the party were dressed as Pirates or Princesses. So they spent the next 2 years planning a special ticket event that would be held January- June. The first party was held January 2007 and the last party was held in June of 2008, I believe. The park advertised party dates in late 2008 for 2009, but cancelled the party prior to tickets going on sale. I never heard the reason behind the cancellation.

Our family was lucky enough to get to participate in this party in February of 2008. I had never had the chance, at the time, to visit MVMCP or MNSSHP, so we took the opportunity to attend the Pirate and Princess Party. I didn't want to dress up, since I'm not really the princess type, so I just purchased a plastic tiara at Target to wear to the party. We found JAG a Jack Sparrow wig/ do rag and eye patch to wear while we were at the Magic Kingdom prior to the party. At the entrance to the Magic Kingdom we were given a black "loot bag" to collect our treasures at specific locations around the park. We also got a treasure map of the park showing where entertainment, the parade route, characters, and "loot" were located. There was a special parade only performed for this party.
Since this party is no longer offered at Walt Disney World, I'm very thankful that we had the opportunity to take part in this fun party! 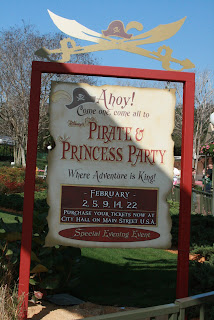 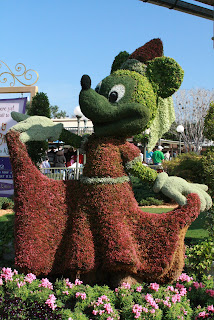 Minnie "Princess" topiary outside the MK 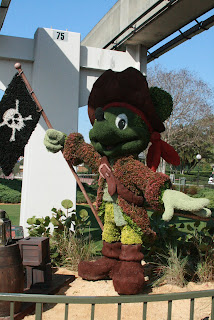 Mickey "Pirate" topiary outside the MK 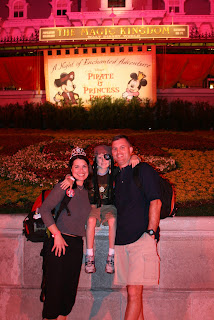 Our family at the MK entrance 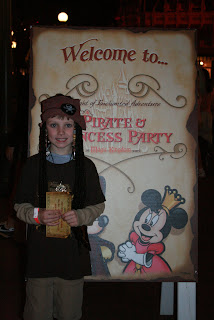 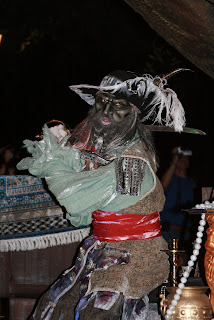 A creepy pirate in the parade 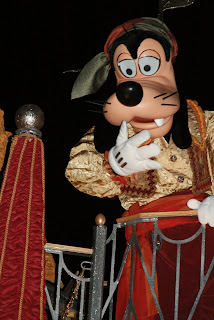 Goofy, the pirate, in the parade
Below is the Adventure Map we received at the party showing some of the entertainment, attractions and food options during the party. 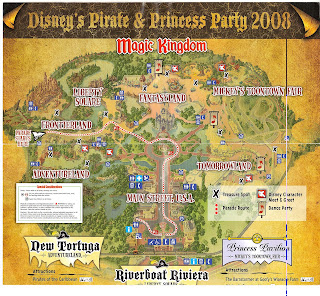 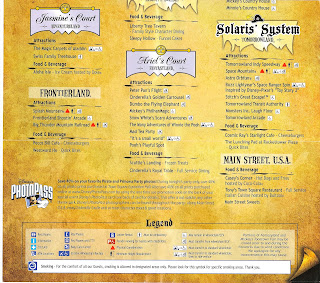 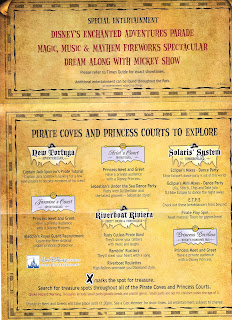 Posted by adisneymomsthoughts at 1:03 PM