I'm so excited about the new interactive queue at Walt Disney World's Haunted Mansion!  I've been reading about it on blogs, websites and twitter.  My parents just missed it while they were there last week, but it should be in full swing in September when I visit!  I wonder if Cman will be too scared to ride?!

Yesterday, I got my daily "Disney Trivia" email and the question was about the Haunted Mansion.


"What true-life mansion is the Haunted Mansion at Disney World partly modeled after?"

I had no idea what the answer was, but this morning, the answer (along with today's trivia question) was waiting for me in my in box!  The answer is...

Who knew!?!  I immediately googled Harry Packer Mansion so I could see photos of this place.  This is what I found. 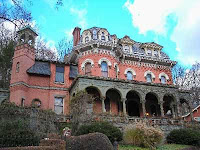 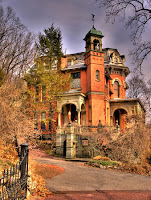 "The Harry Packer Mansion Bed & Breakfast is located in the little Victorian village of Jim Thorpe, PA . Jim Thorpe is a scenic paradise nestled between three mountains in northeastern Pennsylvania. The town is an oasis of perfectly preserved history; the architecture is purely Victorian. Perched atop Packer Hill, just steps from historic downtown, the Harry Packer Mansion sits like a sentinel overlooking the town. The mansion's impressive facade could have been taken from a Gothic novel, so much so that the building's design caught the eye of Disney Imagineers and it became the model for Walt Disney World's "Haunted Mansion!" The interior however is anything but spooky. Fifteen foot ceilings, marble fireplaces and gilded mirrors reflect the elegance of the Victorian Age. The guest accommodations in the mansion and the adjoining Carriage House are furnished with period antiques, luxurious fabrics, and carefully selected artwork. In addition to offering Bed and Breakfast accommodations the Mansion also hosts Murder Mystery Weekends, First Friday Wine Tastings and Special Events. The newest addition to the mansion is Libations Lounge, where you can sit back and relax with your favorite beverage in a setting unlike any other." ~from the Harry Packer Mansion web site 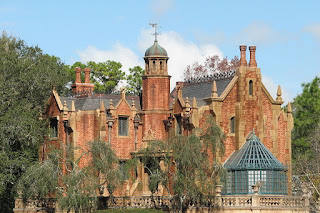 Posted by adisneymomsthoughts at 8:59 AM