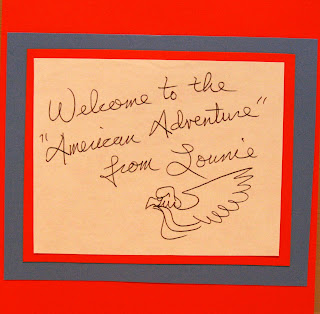 During my marathon trip to Walt Disney World in 2003, I met Lonnie from the "American Adventure." Lonnie is only one of two cast members I've met and received an autograph. The other was Oscar from Disneyland. While we were waiting for the American Adventure show to start we started talking to an older man in the rotunda. The Voices of Liberty had finished and Lonnie started telling us about American History and showing us some of the unique items in the pavilion. He was so interesting and made history fun! After talking with him for quite some time I asked for his autograph so I could remember the moment. I wish now that I had taken a picture with him. On my September trip, I'm going to try to find Lonnie at the American Adventure and get a photo made!
Posted by adisneymomsthoughts at 10:11 PM