A few weeks ago, I was reading my friend's blog, Disney on Wheels, and she posted a photo of DiVine at Animal Kingdom.  This gave me inspiration to do my own post about this amazing "woman!" 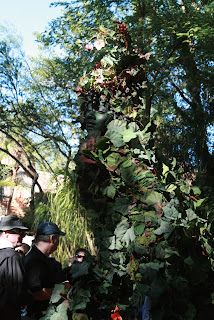 If you haven't seen DiVine before you are missing out.  You can find DiVine on the trails between Africa and Asia in Animal Kingdom.  She is usually hanging out along the edge of the pathway and if you aren't looking for her, chances are you'll walk right past her without even knowing it (unless there is a swarm of people staring at her and taking photos!)  She has been a part of Animal Kingdom since it opened and has gained more and more popularity as the years have passed.  I would describe DiVine as a humanized vine that reminds me of a sloth.  She walks on stilts and has stilts on her hands as well, so she "walks" on all four.  She doesn't talk.  She just lurks around the trees blending in quite nicely!  She is very slow moving and graceful. 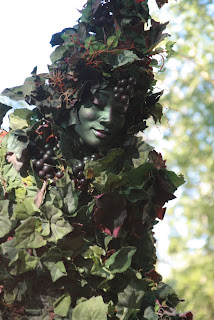 We have probably seen her 3 or 4 times during our past trips, but I only took pictures during our most recent trip in 2010.  In the past we have been to far back to get a photo, I couldn't get the right angle, or couldn't get a shot before she went away.  I still want to get a picture of her blending in or walking around.  She is quite the performer!
On your next trip to Animal Kingdom, be on the lookout for DiVIne as you make your way from Kilimanjaro Safari to Expedition Everest!  She is one of those hidden gems most people miss out on because they are in such a rush to get to the next attraction, event, parade or dining reservation! 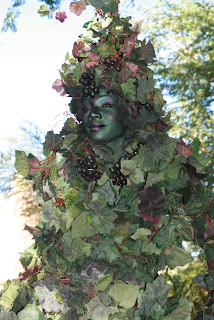 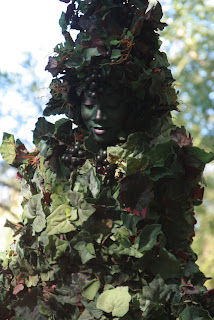 Posted by adisneymomsthoughts at 7:09 AM