On Saturday, May 21, I loaded up C-man and we headed south to Birmingham.  It's about an hour to downtown, so it wasn't a bad drive.  The reason for our trip to the "Magic City" was to attend the first (hopefully annual) Magic City, Magic Kingdom Walt Disney World Travel Event at the AAA headquarters.  Kristen from Southern Web Girl hosted the event and the venue was perfect!!  As Kristen said, the AAA headquarters looks like Disney threw up in the lobby!  There were posters, Mickeys, the planning DVD playing and guidebooks for WDW everywhere.  It was a perfect location without being at Walt Disney World.  The atmosphere made you feel like you were right outside the parks!  When we arrived, we signed up for door prizes (which I did not win), received AAA Disney brochures and a pair of Mickey ears!  That was worth the drive all by itself! 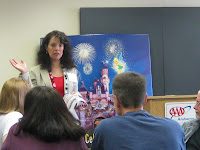 The event included a free lunch catered by Zoe's Kitchen and it was wonderful!  Following the lunch and time to visit with other Disney fans, we made our way into the conference room where Kristen (our hostess), Andi Sims and Bob Sehlinger presented their knowledge of Walt Disney World and answered questions from the audience.  If you are asking yourself who are Andi and Bob, I'll tell you!  Andi is a 2010 WDW Mom's Panelist and spokesperson for the Disney Cruise Line.  She's from Alabama.  Bob, also from Alabama, is the author of the Unofficial Guide books.  (Sorry the pictures are so bad.  We sat on the back row so C-man's DVD player (showing Toy Story, of course) wouldn't bother as many people!) 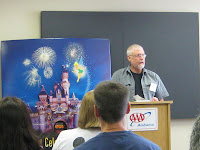 As a seasoned Disney traveler, I didn't learn many new things on this trip, but I met some wonderful people and it gave me a quick Disney fix for the day!  I did learn some new things about touringplans.com.  I was familiar with touringplans and have visited the web site, but I still don't know much about it.  Bob was able to educate me a bit on this topic and I look forward to using it on our next trip!

My favorite part of the event was meeting Andi in person!  I have tweeted with her and we've commented on each other's blogs, but we have never met.  When I told her I was "Beth from A Disney Moms Thoughts" she said, "Oh my gosh!  It's so nice to meet you!"  That absolutely made my day!  Meeting a Disney Mom's Panelist is like meeting a rock star in my world! :)  I covet her position...  I wanted a photo with her, but she was hungry after the presentation and I had already taken up her time talking, so I let her eat!

So, have you ever used touringplans?  Have you met a mom's panelist?  Please share your experiences in the comment box!
Posted by adisneymomsthoughts at 7:32 AM