Home of the Braves... and MICKEY!!

Last month I was given 4 tickets to an Atlanta Braves game so my husband and I took our friends Sara and Jim.  It was the game between the Braves and Mets that ended in the 10th inning when the Mets pitcher balked in the winning run.  Very anticlimactic win, in my opinion, but we still had a blast!

Before the game, we watched a little BP and ventured around the stadium.  Even though we had all been there many times before, we still took the time to walk all around and take in the sights, sounds and smells of the ball park.  To me, it's one of the best things ever!  I LOVE a good baseball game- little league, middle school, high school, college, minor league and major league!  I love me some baseball!  (this would have been even better had we been at Fenway!)

While we were walking around, I spotted an old, familiar friend! 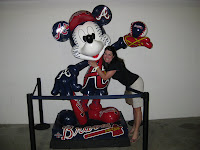 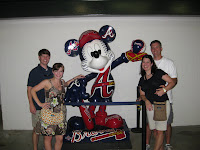 Oddly enough, it looked very similar to the one we met last year in Anaheim at the Angels game! 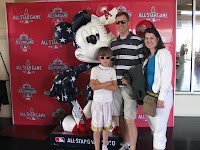 I wonder if all Major League stadiums have Mickey Mouse now??  Or is it just the teams that have a tie in with Disney?
Posted by adisneymomsthoughts at 8:56 AM