Friday's Favorites: "My Guys" from Disney 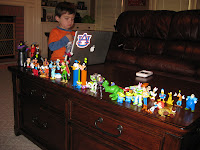 This is a VERY common sight at our house.  C-man lining up "my guys."  "My guys" line up on the table to watch TV, line up on the edge of the bathtub for bath time, line up on the kitchen table for dinner time, etc.  Sometimes it's EVERYONE, and sometimes it's just the favorites of the day.  At any time, one of "my guys" can be found in my purse, in my car or in my work bag- no doubt.

This week, we searched the house, my car and all our bags to locate all of "my guys."  That's when the above picture was taken.  C-man was watching a movie on my laptop, but he wanted "my guys" to watch the news with me.  So, we did. 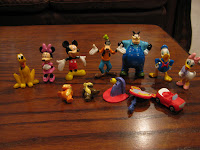 The gang from Mickey Mouse Clubhouse was the first of our collection.  About a year ago I saw these characters on sale at ABC Distributing.  They were part of a book set that came with a playmat for the characters.  We played with these characters all the time! 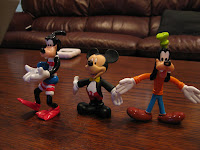 Then the collection grew.  C-man's Mimi found the Goofy figure in his swim gear at her house.  It quickly made its way to our house!  Then at my office, C-man saw another Goofy and Mickey Mouse on my desk.  You may remember all the clutter in my office, so it's not a surprise he found these guys and they made their way to our home!

C-man had so much fun with his Mickey Mouse guys!  That's when I remembered that during our trip to WDW in February of 2006 JAG also had a thing for small Disney characters!  Jonathan and I searched the house and finally found several more "guys" in JAG's closet! 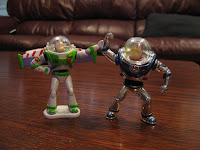 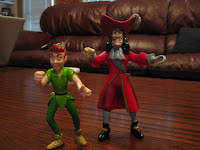 Also in the closet were Peter Pan and Captain Hook! 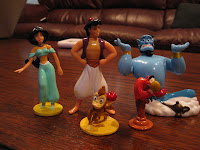 The final addition from the top of JAG's closet were the "guys" from Aladdin: Jasmine, Aladdin, Genie, Abu and Iago.  (These have recently become a favorite since we saw Aladdin on Disney last week for the first time!) 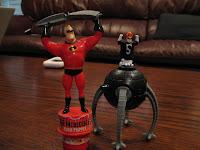 Back in my office one day, after seeing The Incredibles, C-man spotted Mr. Incredible and Syndrome amongst the mess on my desk cabinets!  I tried to convince him that they needed to stay in my office, but he wouldn't hear it.  They are now a fixture at the house. 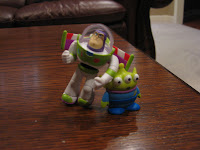 Prior to our trip to WDW last month, C-man saw "trophies" at Wal Mart.  If you're wondering, "trophies" are the Green Army Men from Toy Story.  He thinks they look like a trophy you get after playing a sport!  He wanted trophies to take to Disney but, all the "trophies", or Toy Story Green Army men, (not the bucket of the small plastic ones) at Wal Mart were broken.  Instead, we settled on Buzz and the Alien from Walgreens.  Remember how much I love looking for Disney crap stuff at Walgreens?  Apparently, my son has the same problem when he enters Walgreens. 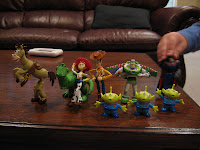 And finally, the most recent addition to "My Guys" is the Toy Story gang!  KK bought this set for C-man while we were at Walt Disney World last month.  Toy Story is, by far, C-man's favorite movie.  This now makes our 4th "Iddy Biddy Buzz" and 4th Alien.  We also have a large Buzz, a smaller Buzz (we call Baby Buzz), a large Woody and a large Zurg.  C-man has to hold baby Zurg up because his gun broke off and that's what kept him  balanced so he could stand!