The long awaited September 2011 trip report begins!
Day 1, 9-21-11
On September 21, 2011, me, my mom (KK) and my son (C-man) woke up before the sun and left my parent's lake house at 3:00am CST.  We started our drive from Alabama to Walt Disney World.  My hope was that C-man would go back to sleep at least until the sun "woke up."  No such luck!  He was "too excited" and was awake from 3:00-5:30.  He finally slept for an hour and was back awake in Macon, GA when we stopped for breakfast.  We continued our drive south and finally arrived at WDW at 1:15 EST. It took 9 hours and 15 minutes.  Not to bad.   The only bad thing was the "check engine" light came on around the Georgia/ Florida state line... 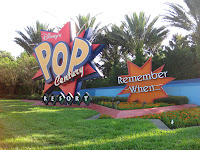 We knew our room at Pop Century wouldn't be ready so we stopped to eat a quick lunch at McDonald's by the All Star Resorts.  When we walked in, Silly Symphony cartoons were playing on the TVs, so C-man knew we were at "Dinny World!"  He was again "too excited" to eat.  Between watching Lambert the Sheepish Lion and eating a few fries, I managed to get 2 chicken nuggets in him!

We checked into Pop Century around 2:00 and were happy that the room was ready, in the building right beside the bus stop and on the first floor!  After the bell hop had all our luggage in the room, C-man and I started unpacking and getting the room situated.  KK went to Shades of Green to get a military discount ticket and then dropped off the car at the AAA car care center to see why the "check engine" light was on.

Once KK returned to Pop, we were ready to blaze a trail!  We walked to the bus stop and headed to the Magic Kingdom.  I always try my best to start off at this park.  There's just something magical about walking under the train tracks and seeing Main Street and Cinderella's Castle.

We arrived around 4:00 to the Magic Kingdom and I started checking things off my list! 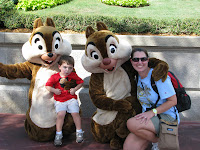 We were able to accomplish all of these things in the first hour and a half of our time at MK!  We met a great cast member (the one who gave us our buttons) who was from South Carolina.  He talked about the SC/ Auburn football game and how hospitable Auburn folks were, since he was "good friends" with Cocky the Gamecock!  That made our day! :)   C-man got over his fear of characters which was a Magical Moment for me!  I wrote about this yesterday for Disney Blue Fairy Shares blog.   Make sure you check it out.   While KK and C-man were strolling around, I had a chance to use my minimal photography skills and capture a bit of the Halloween magic.    I loved seeing all the fall colors and decorations on Main Street.  The pumpkin characters in the Town Square at the entrance to Main Street USA were my favorite!

We ended our time at the Magic Kingdom on Wednesday by watching the Flag Retreat ceremony and seeing the "Move it! Shake it! Celebrate it! Street party." If you have not seen either of these before, I highly suggest adding them to your itinerary.  If you are unfamiliar with the flag retreat ceremony, you can read more about it here.  I'll do a proper post about this soon... but until then, at 5:00pm each day, Disney security, cast members, the Dapper Dans, the Main Street Philharmonic Band, a few guests and a veteran have a quick ceremony to lower the flag and pay tribute to our county.

After this ceremony, we took in our first "Move it! Shake it! Celebrate it" Street Party."  This is a fabulous party where young and old can dance in the streets with the characters.  Mr Incredible was our favorite.  He's quite the good dancer!  C-man had a blast in front of Cinderella's Castle dancing while I took videos.  The "parade" starts at the Town Square end of Main Street USA and moves towards the castle.  Once the floats, characters and dancers are around the hub, they all stop, exit their floats and dance in the streets- Move it!  Shake it!  Celebrate it!

At 6:00, we made our way from the Magic Kingdom to Fort Wilderness by boat.  We had a chance to see the resorts around Bay Lake and the old River Country from our boat.  Arriving at Fort Wilderness, we went to check in at Trail's End Restaurant for our dinner reservations.  By the end of dinner we were all full of fried chicken, potatoes, green beans, cornbread and dessert.  Our original plans were to go to the Meadow Trading Post and see Alice in Wonderland after singing with Chip 'n Dale... but C-man was tired and ready to go home, so we did!
Posted by adisneymomsthoughts at 10:04 AM