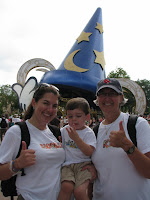 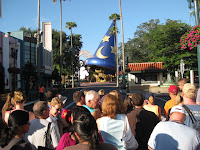 Another FULL day at Walt Disney World.  When you only have 3 1/2 days to do as much as you can, it tends to be FULL!!  Today we woke up fairly early, ate breakfast in our room and took the bus to Disney's Hollywood Studios.  We made it in record time!  I think it took 15 minutes from the time we walked out of our room until we were getting our bags checked at the entrance!  We waited for about 10 minutes at the turn stiles, then they let us walk to "the rope."  We stood here for about 20 minutes waiting for the 9:00 "Rope Drop."  We were in the 4th "line" behind the rope, so we felt pretty good about getting to our destination in a timely manner. 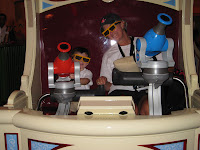 We knew exactly what our plan was (along with 95% of the others behind the rope!).  We were going to go straight to Toy Story Mania.  I was going to park the stroller and get C-man out.  KK was going to take our park tickets to the fastpass machine to get passes for later in the day.  Then we were to meet at the standby line.  This would have worked perfectly if the fastpass line wasn't 10 minutes long- already!!!  While KK was getting our fastpasses, C-man and I had time to browse the Toy Story gift shop.  The only thing we left with was Buzz and Woody stickers...and those were free from the cast member!  We finally got in line and waited about 20 minutes.  It was an easy wait with all the distractions in the queue.

After we rode Toy Story Mania, the fastpass machines were handing out tickets for a 4:30 return time!  Holy Cow!  It was only 10:00 at this point- the park had been open for an hour.  I wonder when this will settle down??  We had our fastpasses, so we didn't worry!  After the ride, we got in line to meet Buzz and Woody.  The wait for this was fun because of the photo ops they provide!  When Buzz and Woody had signed our book, C-man wanted to meet more characters.  We made our way to the Sorcerer Hat to hunt for characters.  We saw several from a distance but only had a chance to meet Piglet.  The others were going in for a break. 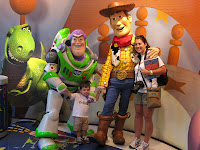 Since we were so close, we went to get in line for Disney Jr. Live on Stage.  C-man loves this show and I loved the changes to include Jake and the Neverland Pirates!  When the "gold doubloons" fell from the ceiling I thought the kids were going to go nuts!  Following the show, Annie and Leo, from The Little Einsteins were meeting and greeting!  We met both of them and then went for our Toy Story Mania fastpass return. 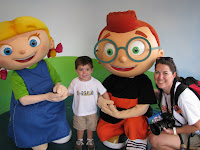 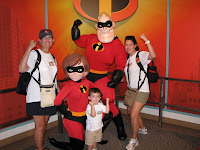 We spent some time in the Art of Animation next.  C-man actually enjoyed the premovie with Mushu this time!  Once we were inside, we met Mr and Mrs Incredible and Winnie the Pooh.  Both were FABULOUS meet and greets!  I have a great story about Mr Incredible I'll share in a future post...  We also spent time at the interactive kiosks "coloring" Flounder from The Little Mermaid and singing with Ursula. 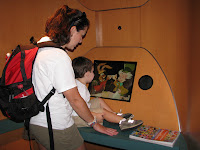 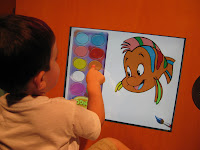 Next we spent quite a bit of time exploring the Honey I Shrunk the Kids Movie Set Adventure.  I can't remember the last time I went in this attraction.  It was a lot of fun, but a tad dated.  I'm sure C-man will never see this movie, so to him it's just another playground!  But... it was a fun playground! :)  After sweating to death in the Movie Set Adventure, we ate our picnic lunch on a bench.  We went to meet Phineas and Ferb, but they were on break, so we went by Lightning McQueen and Mater.  C-man was scared of them, so it didn't last long!

We ended our time at Disney's Hollywood Studios by riding The Great Movie Ride and enjoying a Butterfinger Cupcake from Starring Rolls! 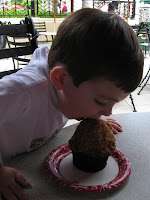 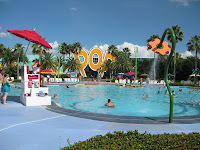 While we were leaving, the afternoon rain came and C-mam and I hurried back to Pop Century while KK went to get the car from the AAA car care center.  My parents now have a new "Disney Catalytic Converter" in their car- this probably makes our trip the most expensive trip KK has ever had to WDW... 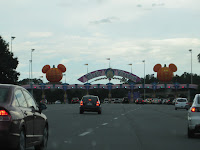 We ended our night at Mickey's Not So Scary Halloween Party- which will be covered in a separate post! :)

Posted by adisneymomsthoughts at 1:22 PM