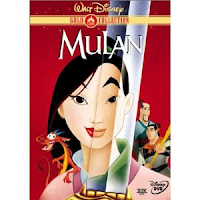 Faith and Disney.  Two things that are very dear to me!  If you have been a follower of my blog for a while, you know I do a weekly segment on Sundays called "Faith and Disney."  I have done "Disney Bible Studies" with my junior high youth at church for a while now.  We will watch a short clip from a Disney movie and have a lesson based on the moral or theme of the clip.  This week's lesson is on Mulan.

Share movie recap: (read this out loud to the group and stop after the bold questions to have the youth answer)

In the time that this story takes place, Chinese women brought their families honor by marrying well and having sons. What do you think would bring your family honor?  However, Mulan is not a typical Chinese girl.  In what ways do you feel you are not typical?  What makes you special?  When Mulan’s father is called to join the army and fight the Huns, she believes he won’t survive another war. So Mulan pretends to be his son and enlists to fight in her father’s place.  Would you lie for your family to save their life?  If the truth is discovered, there will be ultimate dishonor for her father and death for Mulan.  What would keep us from being willing to do something like this for our family?

Watch Movie Clip- Start 1:01:58 “I was this close…this close.”  End 1:04:08 “I promise.”
After her regiment abandons her in the mountains, Mulan admits she joined the army with less than honorable intentions.  She really wanted to prove that she could do something right and that her life is worthwhile, but she ended up feeling like a bigger failure than before.  Mushu tries to offer a little comfort by confessing that he’s also a fraud.  Regardless of their intentions, it’s time to go home and face the consequences- and Mulan’s father. Mushu promises they’ll do so together.

How does Psalms 34:17-18 encourage you to talk to God? (17 The righteous cry out, and the LORD hears them; he delivers them from all their troubles. 18 The LORD is close to the brokenhearted and saves those who are crushed in spirit.)

Posted by adisneymomsthoughts at 9:00 AM