Stars Fell on: Days in the Park

I am so happy to introduce to you my friend Chad who is from Alabama but lives in California now!  Chad is one of my Disneyland friends, which is why I've been blogging about Disneyland this week instead of Walt Disney World!  I had known Chad through the Magical Blogorail for a while before I realized he grew up in Alabama.  I was reading on of his posts for Babes in Disneyland's Blog Hop back in February when I noticed his ball cap in his picture- it was a University of Alabama hat.  Being an Auburn University grad married to an Alabama fan, I had to comment!  That's when I realized he grew up in Dothan and was a huge Bama fan!  It's my honor to introduce you to Chad Elliott!

One of the things I most take pride in is my heritage.  I've literally lived all over the world at this point, but when someone asks me where home is, odds are goods the word "Alabama" will be out of my mouth before the question is even completely uttered. I grew up in a little city (well, it was "little" at the time) called Dothan way down in the southeast corner of the state; so close to Florida in fact that if you stood on your front porch and spit with your back at the wind just right, it'd probably fly right across the border.  Out of idle curiosity, I ran the numbers this morning and I grew up only 351 miles from Orlando, but I grew up a whopping 2,192 miles from Anaheim.  Somehow, I don't think my love of Disney started with my proximity to any of The Parks.
A lot of people I've met in the blogging world really fell in love with Disney while on a trip into one of the beautiful Disney Parks all around the world, but it wasn't so with me.  Growing up, Disney was all about the films, and it's my love of the films that enabled me to fall in love with The Parks so much later in life.  In fact, truthfully, I can't even remember the first time I even heard the words Disneyland or Walt Disney World uttered; I do believe I must have lived in ignorance for the longest time.  For me, Disney meant "The Wonderful World of Disney" on television, and movies such as "The Parent Trap" and "Lady and the Tramp".  And in many ways, the movies are still one of the primary components I use to help keep the Disney magic and love alive in my own life.
My first actual trip to a Disney Park was to Walt Disney World when I was 17 years old and getting ready for my senior year in high school.  I don't remember much about it other than we spent five days there, MGM Studios opened, and we have very few pictures from the vacation.  Not exactly what you'd call a shining review, I know, but it left an indelible spark in me that unfortunately wouldn't be realized for another decade.  Totally unable to find a woman I loved in Alabama, I pulled a Beverly Hillbillies, and headed out west for the girl of my dreams.  My wife and I have been together for 15 years now, so I guess in the long-run that particular move panned out quite nicely.  Perk #2?  I was now less than 40 miles from Disneyland!  Even so, it took the birth of my first two children for me to get it into gear and make my first trip to The Park.  Fast forward another ten years, and I'm now an annual passholder at the Disneyland Resort, I helped start a Disney blog of my own, and I even podcast about it whenever the mood ceases me.  I guess my Disney milestones are set about a decade apart.  Can't help but wonder what the ripe young age of 47 might hold for me!
At its simplest, our (because I help write with one of my best friend's Mark) blog is just meant to be a way to share our love of Disneyland with the world, whether they want us to necessarily or not.  We try to be fun and entertaining in what we do, and we live to bring people along with us to experience whatever we do.  We're definitely just gigantic goofballs, which no doubt turns some people off, but hey, we is what we is.  We're also avid Hidden Mickey hunters, which is a huge reason behind our deciding to blog in the first place.  It was one thing to just look for them ourselves, but then it became a cut-throat game to see who could find the most, which led to us writing about them on our own personal blog (which no-one ever read until we wrote about Disney), and the rest is history I suppose.  So thank you, Hidden Mickey creator, whoever you are, I blame my obsession on you.  Hope you're happy... 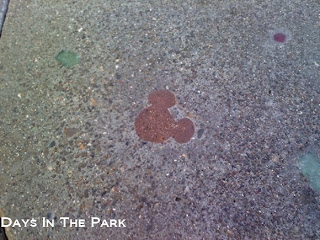 So, we set up our blog at Days in the Park to share everything we saw and experienced with as many people as we possibly could.  We write about anything and everything we can from Disneyland, including our favorite attractions, restaurants, and even restrooms sometimes!  There's always something going on, or something we're getting into, and that is all the inspiration we need!  But wait, there's more!  Not content to simply write about things, we foolishly believed people might like to hear us talk about them as well.  We love hearing ourselves talk about our shenanigans, so why not let other people in on the fun, too?  So we did!  And thus, our "ParkCast" (fancy word for podcast, ain't it?) was born.  Our hope, above everything else, is that people can read, or listen to, what we have to say and just simply have a good time doing it.  That's what it's all about, after all!  When we're at Disneyland, we're just a bunch of kids running around in adult bodies, and our goal is simply to let some of the magic we bring home with us filter out to the world through what we say in whatever medium we say it.  Sometimes we're successful, and sometimes maybe not so much, but we love doing it and hope that comes across in everything that we do. 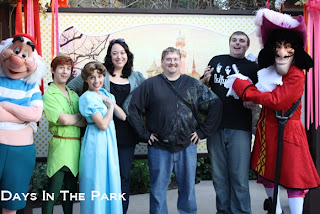 It's been because of blogging that I've met such wonderful people (like our own supremely awesome Beth here) and made so many great friends.  Blogging can be a difficult row to hoe sometimes.  It's not always easy, and you don't always want to do it, but the payoff is so much more than the effort it requires.  It was an honor to be asked by Beth to participate in her segment here, and as a proud Alabamian and Disney blogger I hope I've done her proud, as well.  Y'all come back now, ya hear?