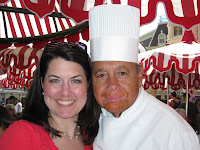 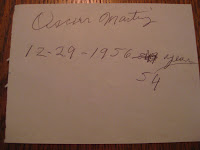 Oscar Martinez celebrated his 55th anniversary with the Walt Disney Company on December 29.  He started working at Disneyland in 1956 as a busboy at the age of 21.  He climbed his way up the ladder overt he years to becoming a Chef and now is an official Ambassador for Carnation Cafe.

I was very, very fortunate to meet him during our one trip to Disneyland in 2010.  I didn't even know who he was when I met him.  He approached our table and started talking.  After asking some questions, I realized he was important.  I asked for a picture and autograph, then he went inside to bring me a pamphlet for Disney employees.  It was after the trip when I learned just what an icon he is!
Oscar was presented with a bronze Snow White and the Seven Dwarfs statue to commemorate his 55 years of service as one of the longest tenured employees with the company.   You can read great articles from the OC Register here and here.


Congratulations to my friend, Oscar!  May you have many, many more magical years at Disneyland!

Posted by adisneymomsthoughts at 1:49 PM