Remember several weeks ago when Deb from Focused on the Magic hosted the Virtual Food and Wine Festival?  Well, I participated and made my great grandmother's spaghetti sauce recipe from Italy.  Of course, when we eat spaghetti, we have garlic bread as a side!  While we were waiting on dinner to be ready that night, C-man asked for a piece of the bread (without the butter and garlic salt) so I cut him a slice.  He told me it was too small and needed the bigger piece.  So, I cut another piece, a bit larger. 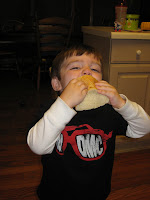 First he grabbed the bread and took a big ol' bite out of the center of the bread.  Then he tore it apart and said "I'm Aladdin!"  I was a bit confused by this comment, but went along with it. 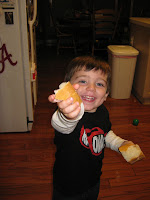 Then, he tore the bread apart and gave me part of it and said, "You are Abu!"

Then it hit me... he was "reenacting" the scene from Aladdin when they stole the bread and shared it in the ally!

It's moments like this that make me so happy that I've instilled the love of Disney in my son!  A day doesn't go by without a reference to WDW, Mickey, Disney or something along those lines. :)


BTW, I did have him pose for these pictures, but this was exactly how it happened the first time around!  It was just too darn cute not to document! ;) 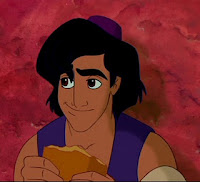 Posted by adisneymomsthoughts at 5:25 PM