I chose this picture to accompany my posts this week about Disneyland and Disney's California Adventure.  We visited both parks in May of 2010.  It was a fabulous vacation, but way too short!

One thing that I loved was the entrance to DCA.  I know a lot of people hated it, but I thought it was beautiful.  The large letters spelling out CALIFORNIA, the mosaics flanking the sides and the Golden Gate Bridge that was also the monorail track, were all so "Californian" to me!  Now, my understanding is that the letters are now gone, the mosaics have been dismantled and the Golden Gate Bride is also being torn down to get a new look.  The new bridge will be the Hyperion Bridge and it should be finished sometime this year.  The artists drawing of the new entrance to DCA looks very familiar to me! 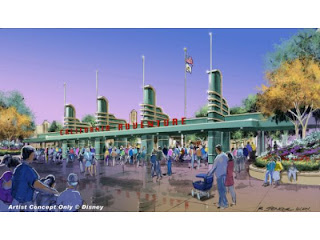 From the OC Register: "Disney spokesman John McClintock said the new entrance is themed after the acclaimed entry facade of the historic Pan Pacific Auditorium, built in 1935 in Los Angeles and the home to auto and boat shows, sporting and political events."

While I will miss the original entrance to Disney's California Adventure, I am excited about all the changes that are coming to this park!  Having the entrance look so similar to Disney's Hollywood Studios at Walt Disney World makes me feel "at home!"