I originally blogged about meeting this couple a year ago here.  But in 2006, they used a stamp to "sign" your book.  I always wondered why they did this since they both had hands with only gloves- why couldn't they sign with a pen?

Anyway, fast forward to 2011.  We went to The Magic of Disney Animation at Disney's Hollywood Studios and met Mr. and Mrs. Incredible.  They were actually in the same location when I met them 5 years earlier!  Cman, KK and I stood in line to meet this pair and I originally was only going to get a picture with Cman and the duo, but when I realized they were now SIGNING autographs instead of stamping, I got my gear out- sharpie, autograph book for me, Disney Junior Encyclopedia of Animated Characters for Cman and my camera.

I was shocked when I saw how close the handwritten signatures were to the stamped ones!  You can see the stamped ones on top and the written ones below.  Now, if we could only get Woody and Buzz Lightyear to sign instead of stamp... 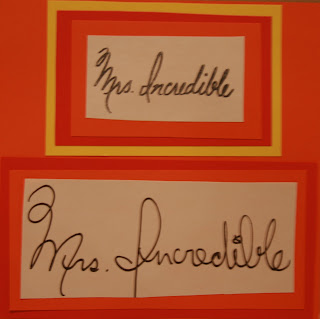 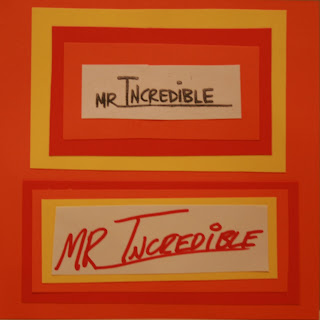