It's been a week and a half and we still have pirate "stuff" scattered around the house!  We successfully hosted a Jake and the Neverland Pirate's birthday party for my 3 year old, Cman, on January 21.  With a lot of planning and doing, it was pulled off without a hitch.  If I could change anything, I would have added 1 more game and hired a professional photographer to take pictures!  I was too busy being mom to also take pictures.  Sometimes I wish I could clone myself.  The one game I would add is a Gold Doubloon hunt.  I wish I had hidden 50 or so Doubloons around the house (kitchen, den and dining room) for the kids to hunt.  They could all add them to the team treasure chest and divide at the end.

Without further ado, here is our party through photos! 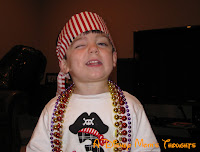 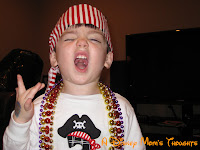 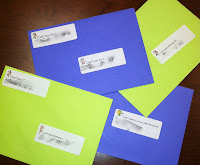 Invitations and envelopes addressed to all the "captains!"  Invitations by Pixels4Parties on Etsy. 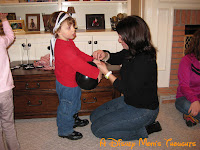 As the kids arrived, they all got a temporary Pirate tatoo.  Most chose their hand, but we had 1 on a foot and 1 on a cheek! 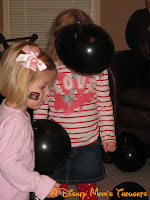 Each kid had multiple chances to "walk the plank" and not fall off into the "water" which was a blue plastic table cloth! 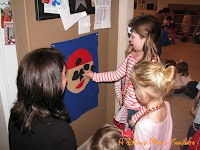 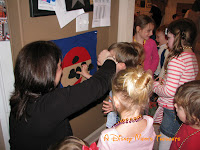 The older kids played "Pin the Patch on the Pirate."  They didn't want to wear the bandanna to cover their eyes, so I just covered them with my hand! :) I think everyone enjoyed the cupcakes, cake and goodies!
The Pirate #3 birthday shirt was from The Sassy Squirrel on Etsy.

After the sugar break, we all went into the garage (it was too wet and cold outside) to dig for treasures! We had 75 Gold Doubloons and a ton of Mardi Gras beads buried in a bucket of sand.

When you're working with a bunch of 2, 3 and 4 year olds, it's next to impossible to get a group picture, but we did OK!

Thanks to all our friends for coming to the party and helping celebrate 3 wonderful years of Cman!!

Cupcake Ships and the Cake- made my my mom, KK!  The cupcake wrappers were downloaded from Cottage Industrialist!

The Thank You Toppers were downloaded from "Tattered and Inked." Pirate Mickey is standing guard over the goodies: eye patches, beads, doubloons, tattoos and scarves!

Most of the ideas were from my Pirate Party Ideas Board on Pinterest!
Posted by adisneymomsthoughts at 6:30 AM