The rumors on twitter and blogs have been confirmed.  I finally saw a post on the Disney Parks Blog about the passing of Ernie McLean.  On February 7, I had written a post about the one and only time I met and talked to Ernie at Disneyland's New Orleans Square.

I read yesterday on various sites that he had lost his battle with cancer.  I still don't know if cancer is 100% accurate or not.  I was holding out for something "official" from Disney saying his death was true.  I got that confirmation tonight.  Ernest "Ernie" McLean died on February 23, 2012.  His presence in New Orleans Square will be missed.  I am so honored that I was able to meet such a kind, talented man and have a small chat with him in 2010.  If you never had the chance to meet Ernie or hear him play, I'm sorry.  He was a true treasure for Disneyland and will be irreplaceable.

Rest in Peace, my friend.  We'll see you again, and I can't wait to hear you play in Heaven! 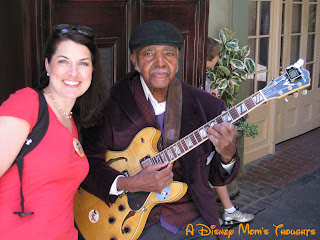 Posted by adisneymomsthoughts at 9:59 PM