Thanks to Tricia for hosting the Disney Foodie Blog Hop!  This is my first time linking up and it was easy for me to decide what to blog about... Desserts!!

On our last trip to WDW, I planned to eat a cupcake at each park.  I almost succeeded.  At Animal Kingdom I got the Cotton Top Tamarin Cupcake from the Kusafiri Bakery.  It was DELICIOUS!!  I love chocolate cupcakes with white icing.  It totally hit the spot!

At Disney's Hollywood Studios I got a simple "Love" cupcake from The Writer's Stop.  I do not like cream cheese, so I didn't order the carrot cake cookie like so many others do.  Instead, I opted for the chocolate cupcake with white icing! :)  Surprised? 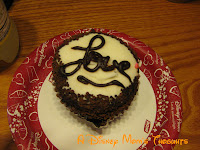 At Downtown Disney I ordered the Brownie Cupcake from Babycakes NYC.  It was a chocolate brownie cupcake with a purple icing... kinda tasted as if it were "white!"  It was a very dense cake, which was awesome!  I was a tad reluctant to order here because it's all vegan (I think) and that's not typically my thing!  I was pleasantly surprised!

At Epcot we visited Karamell Kuche in the Germany Pavilion.  All of the desserts looked amazing and I was very tempted to order something other than a cupcake... The chocolate caramel cupcake was as good as it looked.  The icing was nice but the caramel on top was the true "icing!"

The last park to get a cupcake in was Magic Kingdom.  I got in line at the Confectionary with FULL intentions of ordering a chocolate cupcake with white icing- or at least white icing that was colored!  But then I saw the Easter cookies.  They looked so good and I didn't have as much "will power" to stay with my original plan as I did in Epcot.  I opted for the Easter egg cookie with purple icing.  It was melt in your mouth good, but in hindsight, I wish I had ordered my last cupcake.  There's always next trip! 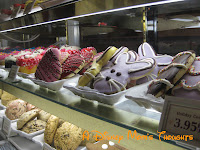 Posted by adisneymomsthoughts at 10:19 PM