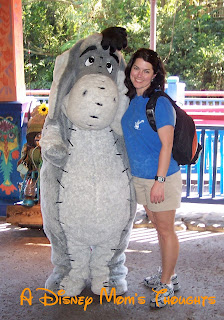 I'll admit.  I'm not a fan of Winnie the Pooh or any of the characters from the Hundred Acre Wood.  I'm not sure why, but I'm not.  Maybe it's my moms fault.  She doesn't like them either, so maybe she brainwashed me as a child... who knows.

But, in 2006 when we took JAG to Walt Disney World for the first time we met the Pooh characters at Animal Kingdom.  You know, the boat dock area that used to be where you loaded for the Radio Disney Cruise?!  Anyway, JAG met Piglet, Pooh and Tigger.  He took pictures with them all and actually smiled, he had them sign his book and he "played" with them. The last character of the group was Eeyore.  I'm not sure why, but when JAG saw him he didn't want anything to do with him.  He refused to visit with him, get a picture or an autograph.  Obviously, this made Eeyore even more sad than he already always is.  He tucked his head, grabbed his tail and started to walk away.  I felt really sorry for the guy, so I chose to have him sign my autograph book (even though I already had his autograph) and get a picture with him!  Maybe I made his day! :)

Posted by adisneymomsthoughts at 6:42 AM