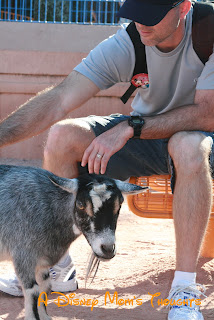 Some of you may have read about our love for Luke Skywalker at Rafiki's Planet Watch.  Luke is was a San Clemente Goat that is was housed at Rafiki's Planet Watch.  We met Luke for the first time in 2008 and fell in love.  He was a funny goat and we went back to meet him again in 2011 and 2012.  We didn't have time in 2010 to head his way and in retrospect, I regret that decision.

In September of 2011 when my mother and I took CMan to WDW, we went to meet Luke.  We walked in the petting zoo area and I immediately asked where Luke was.  The cast member I talked to told me he was retired to the barn and was not meeting with people anymore.  When nobody else was around I asked if "retired to the barn" was code for dead.  She said no.  When the animals get too old to be around park guests, they move them to the barn and continue to care for them there.  She said there were several back there with him.

Fast forward to February 2012.  Jonathan and I went back to Rafiki's Planet Watch just to see if Luke might make an appearance.  Again, the first thing we did was find a cast member to ask about Luke.  This time we lucked out and found a cast member who truly loved Luke, Marilyn from Philadelphia, PA.  She told us Luke was in Heaven.  He had died last summer in 2011.  She almost started crying talking about him.  You could tell she really loved that goat.

She told us several funny stories about Luke over the years.  Apparently Luke liked to eat anything he could get his teeth on!  Her main job in the pen was to make sure guests had ALL paper items hidden in pockets, backpacks or purses.  Here are a few stories she told us:
I'm so glad I met Marilyn and she was truthful and told us these stories.  It makes me miss Luke that much more.  She said there are two more goats who are still young, but are starting to be mischievous like Luke!  Maybe in a few years we'll find these new goats and fall in love with them like we did Luke.

Rest in Peace, my friend.

Posted by adisneymomsthoughts at 11:05 PM