Our trip to Walt Disney World in 2006 was Jonathan (my husbands) first trip as an adult.  He doesn't remember much from his first trip in 1980.  It was also JAG's first trip.  He was five at the time.  We planned several months for this trip hoping to make it memorable for JAG.  We had reservations at Cinderella's Royal Table, Sci Fi Diner and more.  We rode as much as we could, toured all 4 parks (and more), watched all the firework shows and saw most of the parades.  We flew to Orlando and took Magical Express to the All Star Sports Resort where we stayed a week and had a great time!

We thought we had thought of it all and planned everything to a tee.  One thing we didn't plan on was the death of my grandmother.  We were scheduled to fly out early Monday morning and grandma died Sunday morning- the day before our flight.  I was torn.  I din't know what to do.  The funeral was set for Tuesday afternoon.  I had several options: 1) I could miss my flight on Monday, go to the funeral on Tuesday and get a new flight on Tuesday night to meet up with the boys.  2) I could go on to WDW as planned Monday morning, fly home on Tuesday for the funeral and fly back that night.   3) I could miss the flight on Monday, go to the funeral and drive down by myself and then drive back by myself and eat the plane tickets.  4) I could go to WDW as planned and miss the funeral all together.

Option 4 was not an option.  I wasn't going to miss the funeral.  Option 3 didn't sound fun AT ALL.  So my options were narrowed down to #1 and #2.  I could miss 2 full days at WDW or miss one.  I was going to "lose money" either way.  We opted for #2.  I flew down as planned and we arrived at WDW around 10am and went straight to the Magic Kingdom for the day.  While we were walking through Cinderella Castle, it dawned on me.  I would be missing our reservations to eat dinner with Cinderella on Tuesday night.  Jonathan woke up at 6am 180 days out to make these reservations and I was going to miss it.  I was heartbroken.  But, I was already heartbroken by the death of my grandma, so it really wasn't that bad.

When we got back to the hotel that night I took JAG back to the room to get ready for bed while Jonathan hung out near the front desk.  I wasn't sure what he was doing, but had an idea he had something up his sleeve.  About 20 minutes later, he came back to the room and told me Disney took care of everything.  He told them the situation with my grandmother's funeral and they quickly changed our reservations to Friday night!  All we had do do was ask and Disney waved that magical wand and made everything good again!

I did make my grandmother's funeral and only missed one day in the parks.  I left the hotel at 5:00am EST by taxi to get to the airport.  I was in Birmingham, AL by 9:30 CST.  I had time to meet with the family, eat lunch with everyone and go to the funeral.  I was back at the Birmingham airport by 4:00 CST and in my room at the All Star Sports by 9:00 EST via Magical Express.  It was a whirlwind trip, but not having any luggage made it a tad easier. 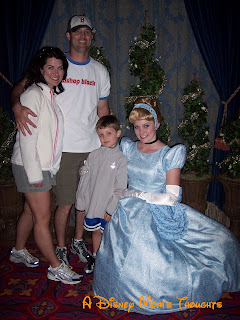 And we had a lovely dinner with Cinderella 3 nights later!
Posted by adisneymomsthoughts at 6:00 AM