This morning was spent at Disney's Hollywood Studios, or MGM as we still call it!  We got their just after rope drop, but still managed to get a ride on Toy Story Mania without a long wait and grabbed fast passes for later in the day.  Once we got that "out of the way", the rest of the time at DHS MGM was a very leisurely!  The only other "ride" we went on was Rock 'n' Roller Coaster.   The rest of our time was spent walking around, talking to cast members and finding "hidden treasures!" 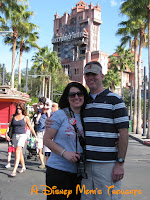 After our Rock 'n' Roller Coaster ride, we were strolling back down Sunset Bouleveard and spotted these two "cops" on the side of the street.  I managed to snap this photo as the one on the left spotted me!  He called me out, so we went over to chat!  They were very nice guys and told us about the World Famous Strawberry Shortcake in Plant City, FL.  The encouraged us to drive about an hour just to eat the Shortcake!  We didn't take them up on it though!  They also gave us some Disney Police badges and stickers for the boys.

After some "cop talk" and sharing of stories, we said goodbye and made our way to the Sorcerer's Hat where the street performers were just about to get started.  We watched them for about 15 minutes and were "called out" of the crowd since we were celebrating our anniversary!  See where the kid is standing in the green shirt?  That's where Jonathan and I were.  They asked Jonathan some questions about how long we had been married, when our anniversary was and where we got engaged.  He got them all right and they were quite impressed that he knew the answers!  I was secretly hoping for a free fastpass or something for our special occasion, but no such luck.

Next, we walked around some more and found a few "hidden treasures" at DHS MGM.  First we found the "do not pull" rope outside of Indiana Jones.  Yes, we pulled!  Then we found the Toilet Paper Tree on the Streets of America.  Next, we found the umbrella from "Singing in the Rain" near the Lights, Motors, Action Stunt Show.  I also finally found one of the survey markers at MGM and took a picture, but I'm not posting it since I already have so many photos!  After we walked around, met Phineas and Ferb, Jake and some others, we made our way to Epcot.

First we made our way thought MouseGears and headed towards Universe of Energy.  We decided not to ride and do Mission: SPACE instead.  We definitely did the green side since I was 10 weeks pregnant and already susceptible to motion sickness!  I did get dizzy, but nothing like the orange side!  Then we started World Showcase on the Mexico side.  We skipped Mexico and Norway and made our way to China for a bite to eat.  We wanted to eat at Lotus Blossom on a quick service dining credit, but they didn't have what I wanted, so we settled on Nine Dragons. 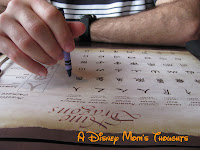 We had eaten here before and had a good experience, but this time was definitely so so. Not sure I'll do it again.  I had chicken fried rice and Jonathan had some sort of chicken dish.  We had more fun writing in Chinese than we did eating.  After lunch we continued our way around the Showcase.  I stopped to take several pictures focusing on cast members. 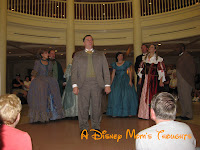 We saw the Voices of Liberty in America before taking in the American Adventure show.  We stopped for gelato in Italy and had the "pleasure" of hearing Mo'Rockin' for the first time in Morocco.  We eventually made our way all around the Lagoon and went back to the resort for a break. 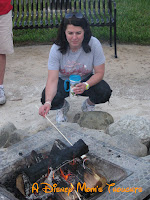 Since we were in our own car this time, we had our refillable mugs with us and decided to stop by the food court for a drink.  I fell IN LOVE with the Pomegranate Lemonade!  Back at our building at the French Quarter, we saw a few cast members starting a camp fire.  Yup, it was time for s'mores!  I made a few several before taking a quick nap before our dining reservations! 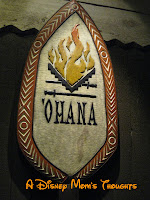 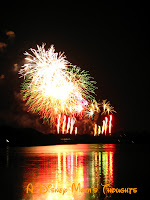 Our reservations were at 'Ohana at the Polynesian Resort for 7:45.  We arrived at 7:30 and the lady encouraged us to go to the beach to find a spot to watch "Wishes" at 8:00.  I was worried we would lose our reservation time if we watched the fireworks, but she assured me we could come after "Wishes" and we would be seated.  So, that's what we did!

This was the second time we had seen "Wishes."  The night before we saw it from the rooftop of the Contemporary and honestly, I think I liked this view better.  They had the music piped into the speakers at the beach and they paused the night movie on the beach so that noise wouldn't interfere.  The only thing I wish I had had was a blanket to sit on... and I'll post WHY tomorrow for my "Tuesday's Tip!"

Dinner at 'Ohana was fabulous!  We ate WAAAYYYY too much, danced for our anniversary to the ukelele player and got leis.  It was a perfect night and I can't wait to do this again with our boys!!
Posted by adisneymomsthoughts at 12:25 PM