Rewind to February 13, 2012.  This was our first full day at Walt Disney World.  I shared with you several weeks ago about our first night at Downtown Disney.  Now, we've finally made it to day 2!

We began our day at Epcot.  We got there fairly close to "rope drop."  This wasn't a priority for us, so we kinda took our time!  Our main focus of the day was World Showcase and it didn't open until 11, so we took our time going through Future World. 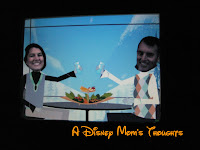 We started at Spaceship Earth.  There was no line since everyone else was rushing to Soarin' or Test Track!  When we exited, we did go grab Fast Passes for Test Track and made our way to The Land.  We ate breakfast at Sunshine Seasons and rode "Living with the Land."  This is one of our favorite attractions at Epcot!  After strolling around The Land and taking a few pictures, we made our way to Test Track for our return time. 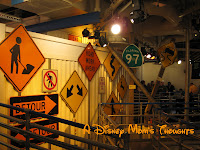 If it weren't the last time we would have a chance to ride Test Track the way it is now, we would have left.  They had mechanical problems and we waited for over 30 minutes without moving.  But, I did get a few photos of the queue during this time since it will be closed during my next trip in July and I don't know what the changes will entail!

By this time, it was 11:00, so we headed towards World Showcase.  We started on the Mexico side and made it through Mexico and Norway.  Once we made it to China and walked around a bit we realized we needed to start walking to Canada for our lunch reservation at Le Cellier.  This was, hands down, the best meal of our trip!  In a way it was bad starting with such an awesome meal because every meal after that was compared to Le Cellier!  We both ordered the fillet mignon and it was pure heaven.  The best steak I've ever eaten.  We even debated canceling future reservations at other restaurants to see if we could get back to Le Cellier.  Everything about this meal was heaven.  I'd highly suggest it! :) 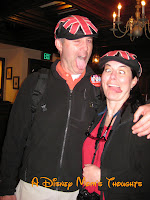 After our late lunch, we moseyed around toward the United Kingdom, France, Morocco and Japan.  Not having the boys with us gave us time to really take in the countries.  I think we went into every shop and actually took our time!  While we didn't watch the movie at Canada, we did take in the France movie.  We saw street performers in the UK and France.  We heard MoRockin' play in Morocco.  We saw Miyuki the candy maker in Japan, the Hat Lady in UK and listened to The British Revolution.  We sampled snacks and drinks in the countries and I so kindly asked my husband to take a picture in each country wearing a "native" hat!

The British Revolution and Miyuki

Once the sun set, we decided to walk to The Boardwalk.  I tried to take some night photos with my camera and tripod, but wasn't very successful.  I have so much to learn, but no time to learn it!  We took our time here too and finally found ourselves hungry for dinner.  We ordered a pizza from The Boardwalk Pizza Window and ate it by the water.   While the ducks wanted to share it with us, we declined.

While looking at my spreadsheet and official times guides to plan our next day, we realized Hollywood Studios had evening magic hours.  So, we took the Friendship Boats from the Boardwalk to DHS.  Once at the park, we went straight to Toy Story Mania to see what the wait time was... 90 minutes, no thanks!  Instead, we walked around Hollywood and Sunset Boulevards and settled on The Great Movie Ride.  The band "Mulch, Sweat, and Shears" was playing when we got off and we instantly knew we didn't want to stick around for their show.  While we loved the genre of music, we did not enjoy their sound, at all. So we ended our night walking through the shops on Hollywood Boulevard.