Day 3 of our February Trip was on Valentine's Day!  I can't think of a better place to celebrate Valentine's Day with my husband!  We decided to spend this day at the Magic Kingdom.  We woke up early and made it in plenty of time for Rope Drop.  We were on the front row, actually!  I had Jonathan video while I took stills.   I can't watch this performance without crying!  I think that's why they've never asked our family to be "the family" to open the park.  They know I'll just stand on the platform and cry the entire time! 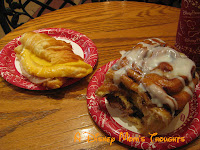 Once the park was open, we  spent quite a bit of time on Main Street, USA.  This is my favorite spot on property!  I really think I could spend an entire day walking back and forth taking in the sights and sounds.  There are always entertainers of some sort, parades, shopping, eating, characters and "rides" if you count the trolleys!  We saw the cast members wave to guests, we met the Fire Chief and Tony from Tony's Town Square Restaurant.  We took lots of pictures, ordered our 2 baby Mickey ears and had breakfast at the Main Street Bakery!  Yes, I'll be visiting the bakery on every trip here on out- it was that good! 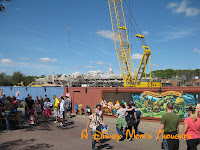 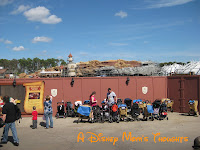 Most of our day was spent walking around.  Not having "the boys" with us, we weren't rushing from one attraction to the next.  Nobody was tugging our sleeve to get to the next place or run to the next Fast Pass.  We spent the first half of the day just walking and not even "riding", except for my favorite, the Peoplemover! :)  We spent time in Fantasyland, took pictures of the new expansion, met Rapunzel, wandered through Tomorrowland and ended in Frontierland.  It was awesome not rushing around... but I will admit, I missed not having our boys with us!

After a hamburger lunch at Pecos Bill Tall Tale Inn and Cafe we did something we've never done before!  We rode the Liberty Square Riverboat!  Yes, I'll admit after 17 trips to Walt Disney World, I had never been on the Riverboat.  I did meet Donald here one year, but the boat was docked and not sailing.  So, I did something new on my 18th trip!   After the Riverboat cruise, we visited the Haunted Mansion (where I filmed my video), the Hall of Presidents and meandered around Liberty Square.  We eventually made our way to Adventureland and took in Pirates of the Caribbean.

Late afternoon, I was ready to rest!  We decided to take the bus back to Port Orleans Riverside and walk around the property for a while.  We eventually took the path to French Quarter and got back to our room.  We rested a while and got ready for our dinner reservations at California Grill! 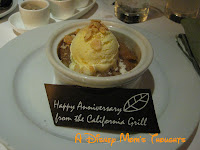 We decided to drive to the Contemporary for our dinner reservation at 7:25.  I chose this time so we would be "on top" of the Contemporary at 8:00 when Wishes started in the Magic Kingdom.  We ended up getting there early and they sat us at 7:00.  We were able to eat our appetizers and entrees before 8:00.  A few minutes before 8, we made our way to the outside roof to get a view of Cinderella's Castle.  This was one of the best things we did all week!  Watching Wishes from the top of the Contemporary, with the sound piped in to the roof, was so awesome!  It was very romantic and I was very glad we did not have our boys with us at this point!

One thing I would do next time is go outside before eating to find the best place to stand.  Then I would leave 15 minutes before Wishes to claim that spot!  We were at the far end of the roof near the stairwell.  While we had a great view, I would have rather been at a different spot on the rooftop, I think.  Live and learn...
Posted by adisneymomsthoughts at 4:35 AM