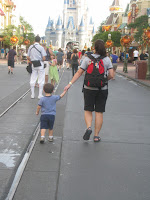 I'm always asked, if you only had one day in the parks, which one would you choose... my answer is always Magic Kingdom, even though I do love Epcot, Hollywood Studios and Animal Kingdom too!

Thanks for the fun countdown Heidi!!  I look forward to future themes! :)
Posted by adisneymomsthoughts at 5:30 AM