Magical Blogorail Green: Best Way to Get Wet at WDW

Welcome to those of you joining me from Adventures of a Disney Princess and those of you just hopping aboard. I am the 4th stop on our Magical Blogorail.

But, my family rarely experiences any of these options!  Since we usually travel in January or February, we tend to stay away from the water.  Even though it's much warmer in Florida than it is at home, we still try to stay dry and not deal with wet clothes and hair!

However, I have experienced almost all of these water options at some point in the past.  While I do love the water attractions, they aren't high on my list.  I love the different pools at the resorts, but honestly, I think I've only swam in 2!  I like to spend my time at the parks rather than the resort pools.    So, my #1 place to cool off and get wet at Walt Disney World is at the water parks!  And between the two parks, I would choose Typhoon Lagoon as my favorite. While I do miss River Country at Fort Wilderness, Typhoon Lagoon still tops my list. 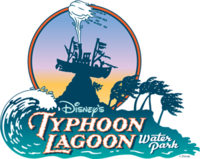 I love the back story for the park!  "According to Disney legend, Disney's Typhoon Lagoon was created by an epic storm. Surfboards were hurled into palm trees and boats were tossed around like toys. The typhoon made the storm-soaked Mount Mayday an ideal source for exhilarating waterslides. Surrounding the mountain, a 56-acre topsy-turvy tropical paradise was formed—full of waterways, rivers, rapids and slides. The park's famous icon is an ill-fated shrimp boat named Miss Tilly. She found herself swept up by the twisting tides of the fierce typhoon and came to rest on the peak of Mount Mayday. Every half hour, the boat's whistle blows and the volcano attempts to dislodge the ship, resulting in an enormous geyser of water." (from disney.go.com)

My favorite attractions are "Castaway Creek", the lazy river, and the Typhoon Lagoon Wave Pool, which is the largest wave pool in the world! I like this wave pool better than others because the waves are continuous, like ocean waves. You can actually "ride" or surf the waves all the way into shore! You can actually pay additional money to have 2 1/2 hour surfing lessons prior to the park opening! Another unique attraction in this park is the shark reef where you can snorkel with live sharks... leopard and bonnethead sharks- no great whites! ;)

What is your favorite part of Typhoon Lagoon?