Today started out as a great day to head to Animal Kingdom.  We arrived shortly after the park opened and the lines to get in were crazy... I should have taken a picture of people waiting to get through the turn stiles.  Then I remembered the entrance through Rain Forest Cafe.  We hurried through the gift shop and walked right into the park!  It was as if the ladies working that turn stile were waiting just for us! :)

Once inside we headed straight to Expedition Everest hoping to get fastpasses, but the line was only 10 minutes, so we got in line.  We hurried through the "exhibits" in the queue and were actually on the ride in about 5 minutes.  This was the last picture I took (on the ride) before my day was almost ruined...

And below you can see me after the ride...

I will NEVER ride Expedition Everest again.  I've written before about the attractions and rides at Walt Disney World that I don't care for or make me sick and this is now on my list.  I remember the last time I rode in 2008 I felt nauseous after I got off so I skipped the "second ride" with Jonathan and JAG.  In 2010 and 2011 I didn't ride because I was with C-man and he's too short/ young.  In 2012, I took my final trip with the Yeti.  At first I thought it was a pregnant thing (my doc said I could ride anything I wanted since I was only 10 weeks along and my uterus was still "safe" in my pelvic bones... TMI?  Maybe!), but then decided it wasn't.  It's an "I'm getting too old to handle this ride" sickness.  While I still "like" this ride, I'll pass!

I tried my best to beat the sickness, but just couldn't, so we went back to the French Quarter Resort so I could take a nap.  The best part was when we got there our key wouldn't work... I sat by our door while Jonathan went to get a new key.  When he came back, the new key didn't work either!  UGH!  I was trying so hard not to vomit on the walkway, so I just laid down and let the coolness of the concrete floor do it's thing.  I felt a tad better, but still wanted a drink, crackers and a bed.  Jonathan then came back with a maintenance man who was fixing ALL the doors in our building.

After an hour nap, so lunch and tylenol, I felt better and we went back to Animal Kingdom but didn't go near Everest! :)  We spent quite a bit of time on the trails around the tree of life and the Oasis.  Somehow I've missed the trails at the base of the tree that aren't part of the Tough to be a Bug queue.  It was really beautiful up close.  While we were walking, I spotted a cast member with the hometown of Ligonier, Pennsylvania.  This is a small town in PA with about 1600 people, where my mother in law grew up.  We spent a few minutes talking to him and I snapped a picture of Jonathan with him.

I was still hesitant to "ride" anything so we spent most of the time walking around.  We toured Chester and Hester's area in Dinoland, the Maharajah Jungle Treck and made our way toward Camp Minnie Mickey for the afternoon parade.  This was the first time I'd seen Mickey's Jammin' Jungle Parade so I was pumped!

Following the parade, we made it to Africa so I could get a Cotton Top Tamarin cupcake!  It was DELICIOUS and made me forget all about the Yeti and how much I hate him now!  I would highly suggest this sweet snack.

After my cupcake indulgence, we made it to Rafiki's Planet Watch hoping to find Luke Skywalker.  Sadly we found out the truth about our little friend.

Following our train ride, we got in line for one of the last Kilimanjaro Safari rides of the day.  This was BY FAR the best part of the day (with the cupcake a close second) and the BEST safari ride I've ever experienced.  Our driver was even giddy with excitement! We saw so many animals and even saw a Cheetah jump into a tree, look around, jump out of the tree and RUN away!  Our driver claimed she had never seen this before!  Then when we got to the Lions, she freaked out again because the male lion was pacing the rocks.  He was beautifully majestic.  Amazing.  Again, the driver was so excited and said this was the best safari she had ever been on and her colleagues would never believe her when she shared what we saw! 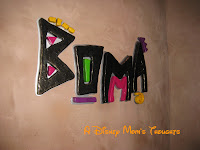 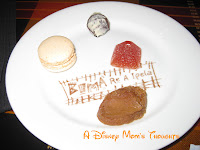 After Animal Kingdom, we made our way to Boma in the Animal Kingdom Lodge for dinner.  While it was good and we went away with full bellies, I'm not sure we'll eat here again.  We were both glad the boys were not with us.  Not sure they would like it.  I think the only way we'll go back is if we stay at AK Lodge.  But the anniversary dessert samples were a nice touch! 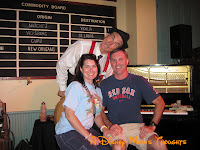 We decided to head to Port Orleans Riverside after dinner to catch YeHaa Bob's early show.  What a treat and what a fun way to end a day that started off rocky!  This was another first for us on this trip.  I know my youngest (3) would have loved singing and dancing to his tunes, but I'm sure my 11 year old would have been too cool and too embarrassed to dance and sing! :)
Posted by adisneymomsthoughts at 3:04 PM