Finally, almost 5 months later, I'm sharing about our last day at WDW in February!  Crazy how busy life has become with an 11 year old, a 3 year old, a full time job AND another baby on the way.  Whew!

Waaayyyy back on February 18, we started our day in the Port Orleans French Quarter food court enjoying the beignets.  What a fabulous way to start the day!  If you are staying at POFQ, I highly suggest the beignets! 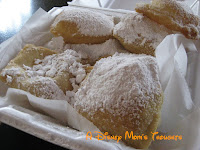 Following breakfast, we mad our way to Downtown Disney.  We started on the West Side and leisurely made our way to Marketside.  We stopped in several shops to browse before ending our shopping extravaganza with a stop in Goofy's Candy Co where we spent way too much money!  We then had incredible lunch at Cap'n Jacks to finish out our time at Downtown Disney!  Surprisingly, this was one of my favorite meals of the trip!  I ordered the pot roast and veggies- delish! 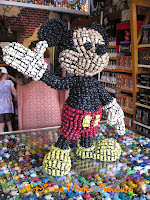 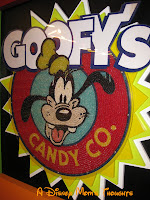 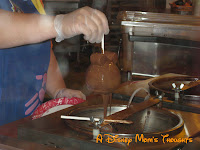 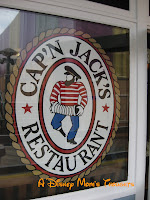 The rest of our afternoon and night was spent at MK.  We spent most of the day walking around the park, looking at everything and visiting ALL the shops, again!  If the lines were less than 15 minutes, we stood in line for an attraction.  By this point in the trip, we had been on everything we wanted to ride so these rides were just extra gravy on top!  We met Mickey and Minnie and I had the chance to tell him I was pregnant!  He was excited and as you can see below, Minnie was surprised! :) 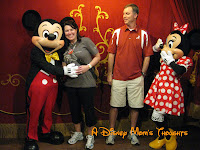 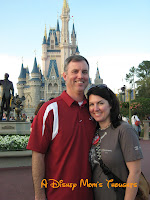 We also sat upstairs at the Main Street Train Station to view the Flag Retreat Ceremony.  This was still a great ceremony, but totally different from the one we saw in September of 2011.  In September, the Main Street Band played, we sang God Bless America and it was a true ceremony.  This time, there was no band, no singing and barely an introduction of the veteran who "lowered" the flag.  It was quite a disappointment from my September trip.  And to top it all off, the veteran had visited "The Pirate's League" that day and was painted up like a Pirate... he did take off his accessories, but still had the face paint including 4 additional eyes painted on his cheeks.  Not the look I expected for a veteran who was lowering the flag at the Flag Retreat Ceremony... 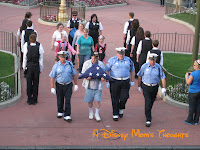 To end our night we watched "The Magic, The Memories and You!" along with the Wishes Fireworks show from the Train Station.  It was the perfect end to a perfect vacation!

Posted by adisneymomsthoughts at 6:53 AM