Welcome to those of you joining me from Disney Living and those of you just hopping aboard. I am the 2nd stop on our Magical Blogorail.

Today we are sharing about "Laughs" at Walt Disney World.  What a fabulously fun topic!  When I first got this "assignment," I had no idea what to write about.  I even asked my husband if he remembered a specific "thing" we laughed about while on a WDW trip.  He had the same blank face I had.  I know we laughed on all our trips, but no one, big story popped in my mind.  But the more I strained to think about it, little things came to mind!  So, I'll share my 5 favorite "Laughs" from various WDW vacations (in no particular order, might I add).

1) Test Track Photos.  The night before we ran the marathon in 2003, we were invited to a dinner in Epcot at the pavilion where the Food and Wine Festival is held.  After the dinner, instead of exiting the park like we should have, we snuck off and went to ride Test Track a few more times.  We had an obsession that trip with the ride photo and NEEDED one more with the bananas we got a the dinner!  To us, at the time it was hilarious.  Maybe not so much for you reading this!

2) Bird Poop.  Gross, yet funny.  One trip, either 1983 or 1986, our family was taking a break eating ice cream cones.  There happened to be another family nearby doing the same thing.  We were watching this family as a group of sea gulls flew over head.  Apparently, the drop on the mom's lap wasn't a drip from her chocolate chip ice cream... it was sea gull poop.  How do I know this?  She used her index finger to "swipe" the ice cream drop off her lap and lick it clean.  Her face told us it was poop and not ice cream.  Yes, we still laugh at this lady almost 25-30 years later!

3) Sleeping "Beauty."  One trip, my brother stepped on a large piece of glass the night before our WDW trip and had several stitches in his foot.  He needed a wheelchair on the trip since he couldn't walk well and the crutches were too hard to use for so many miles.  While we were riding Space Mountain, my father decided to not ride so he could "watch" our stuff and the wheelchair.  When we got off he was sound asleep in the wheelchair and the photo that was taken is priceless!  Still one of my favorite WDW photos that makes me laugh!

4) Adventureland.  This laugh was strictly on accident.  During our 2006 trip to WDW, JAG (our oldest) asked me to take his picture under the Adventureland sign.  The photo on the left was the result. Then, in 2010, he asked to have his picture taken again at the same spot.  We asked why, since we remembered the first picture and he just said, "I don't know, I want it."  We died when the result was so similar to the 2006 photo!  We asked if he remembered the first photo and he didn't.  He didn't see how funny it was until we got home and could show him both photos side by side! 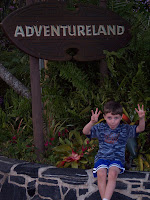 5) Wet Butt.  On one particular trip it seemed each time we got off of a water ride, one of us was completely dry except for a bit wet spot on our butt.  Apparently someone stepped on the seat either loading or unloading the ride and one of us sat in it!  (Note to self, don't step ON the seat when getting on or off a water ride.)  It doesn't sound quite as funny now that I'm typing it, but we laughed the whole trip at that person with the "wet butt!"

Final Stop ~ Walt Disney World: Not Just for Kids
Posted by adisneymomsthoughts at 6:00 AM