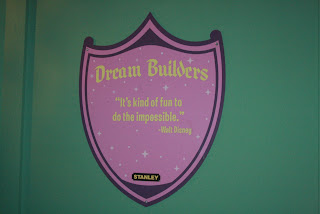 "It's kind of fun to do the impossible."
~Walt Disney

This was on the wall around the Fantasyland expansion back in February.   I wanted so bad to climb over the wall and see what was going on... but I didn't! :)

When I think about this quote, in Disney terms, I think of several things...

1) I actually finished the Walt Disney World marathon in 2003.  I had stress fractures in one shin and shin splints in the other.  I was told by my doctor not to run at all, but I did.  I had raised over $4,000 for the Leukemia/ Lymphoma society and was running in memory of my uncle.  I was NOT about to give up, so I did what seemed to be impossible at the time and low and behold, it was actually FUN!

2)  That first marathon was in fact so fun, I ran the half marathon in 2008 with my husband!  This time at mile 8 I pulled my IT band and was in quite a bit of pain.  After I got home and saw the doctor, I found out I also had a stress fracture in my foot at the same time.  Finishing those last 5 miles with a pulled IT band and stress fracture seemed impossible, but I did it.  Again, in the end, it was fun and I'm glad I did it!  Being in Disney made it fun... not sure running through a random city with those injuries would have been fun!

3) Finding a way to visit WDW when money is tight.  There have been several trips that seemed impossible financially, but in the end we found a way to make it work (staying off property with friends, camping, staying at a value resort, brown bagging our meals, bringing our own mini fridge for the room, getting discounted tickets, not adding park hopper, driving, etc).  When we thought going to WDW would be impossible, we found a way to make it happen and guess what??  IT WAS FUN to do the impossible! :)