1. The Halloween ride.  While he hasn't even been on The Haunted Mansion, he's totally obsessed with it, the song "Grim Grinning Ghosts" and the you tube videos!  He then added that he was thankful for Jack Skellington on the Halloween ride!

2. The drums at Winnie the Pooh.  Not the ride, but the interactive queue where he can play the drums that look like food.  He and his older brother spent quite a bit of time banging these drums in 2010 when he was only 22 months old!  He still remembers these drums and talks of them often! :) 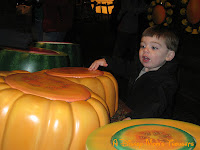 3. Dumbo.  "I just like that ride!  It's my favorite.  Oh, and Peter Pan.  I like flying with Peter Pan and looking at Captain Hook." 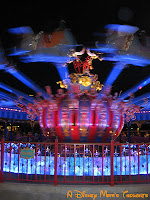 happy thanksgiving from C-man!
Posted by adisneymomsthoughts at 7:00 AM