Our family loves sports.  In fact, if our TV isn't on one of the Disney channels, it's probably on one of the ESPN channels (which I guess is technically Disney!).  While we can't all agree on which college team to cheer for (I'm an Auburn fan along with the two younger boys and daddy is an Alabama fan along with the oldest boy) we can agree on which MLB team to root for.  We all cheer on the Boston Red Sox even when they have a season like this past one!

When it came time to move C-man into his big boy room in order to make room for Big E in the nursery, we decided to do a sports theme.  Since we couldn't agree on the college team, we decided to paint a Fenway Park mural on his walls.  Luckily, my dad is an artist and was able to free hand the entire mural.  Here are some of the progression shots:

And here is the final product!  C-man was one proud little boy when he had his own Fenway Park bedroom! 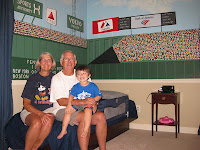 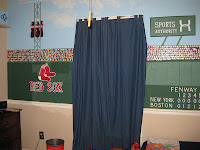 But, after 2 months, I decided something was missing.  I just had to add a little bit of Disney magic into his room.  Since he is almost as obsessed with Disney as I am, it only made sense.  I dug out all the paints and brushes and decided to add a Hidden Mickey in the stands.  But, it didn't stop there.  How much fun would a Red Sox game be without your best friends?  So, Minnie, Pluto, Donald and Goofy came along too!

If you look in the photo below between the Sports Authority sign and Citgo sign, you may be able to see five little heads enjoying the game! 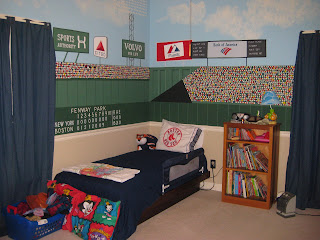 Here is the close up! 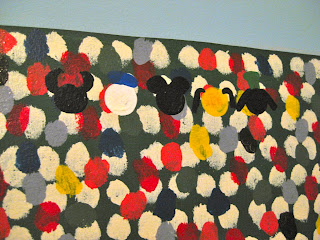