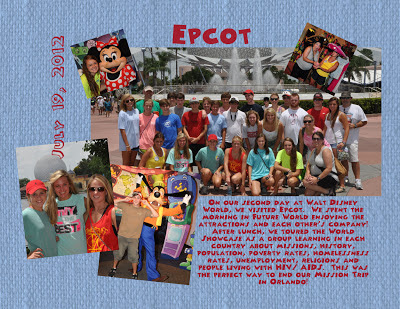 On July 19 we had our first day in a park.  All 28 of us woke up early and loaded on the WDW bus to head to Epcot.  We were there prior to the gates opening and the first thing I told them to do was take a picture of the back of their park ticket.  Just in case it was lost, we'd have record of the ticket number.  (remember that!)

Once inside, everyone split into smaller groups to find their favorite attractions and grab Fastpasses.  I went straight to Living with the Land!  It's my favorite!  Once my husband and I rode that, we ate breakfast at Sunshine Seasons.  Then I got the call.  One of my youth had gotten sick on Mission: SPACE and needed to go back to our resort to change clothes.  I guess the only good thing was the cast member gave him a new shirt to wear!  He rode the "Orange" side and the shirt they gave him was a solid orange shirt... coincidence?  Maybe!

So, he and I took the bus back to Pop Century so he could change, wash his face and brush his teeth.  Being the trooper that he is, he was ready to head back to Epcot in about 10 minutes, max!  We got back on the bus, just the two of us and the bus driver, and made our way back to the park.  As soon as we got off the bus I hear, "Uh oh, Beth!"  I really thought he was going to yack again, but that wasn't it.  He had left his park ticket in the pair of shorts he took off at the resort.

Instead of panicking, I remembered he took a picture of the back of his ticket!  I was hoping this "tip" I had read about on blogs was true!  We went to guest services and told the cast member we had lost a ticket, but had a photo of the back.  He said it would be no problem, he just needed to see the picture.  We gave him the phone with the photo and zoomed in on the numbers... which were too blurry to read.  He said he couldn't do anything for us.  THEN, I remembered I had xeroxed all the ticket backs with the youth's names and had the copies in my bag.  I dug through, found the paper and gave it to the man.  BINGO!  It worked!  He said this was perfect and he replaced the ticket in 5 seconds!  I asked what would have happened if we didn't have the photocopy and couldn't find our original ticket.  He said our only option then would be to buy a new ticket.  Luckily it all worked out for us! 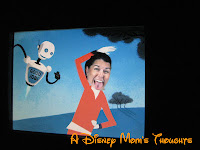 Following my jaunt back to the resort, I met back up with my husband and we rode Spaceship Earth and walked around Future World.  We used our meal vouchers to eat lunch at Sunshine Season's and then met the youth to start our tour of the World Showcase.  We went to Mexico, Norway, China, Germany, Italy and America.  Then we all hit a wall.  We were exhausted.  After traveling by bus without air conditioning, working on homes for 2 days and sleeping on air mattresses, we really needed a day to relax, but instead we were touring Epcot!  So we decided to take a break.  I encouraged them to drink lots of water and sit.  If they wanted a nap, I suggested the 45 minute Universe of Energy attraction! 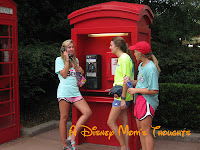 Following our break, we continued touring the World Showcase: Japan, Morocco, France, United Kingdom and Canada.  While at each of these countries we had a lesson.  We learned a bit of history, statistics and missions for each country.  This was a great tie in since we just finished our mission trip helping others. 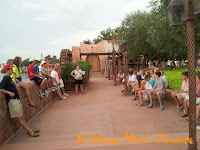 We ended our day with a bit more free time, dinner vouchers (I ate at Electric Umbrella) and viewing Illuminations.
Posted by adisneymomsthoughts at 6:00 AM