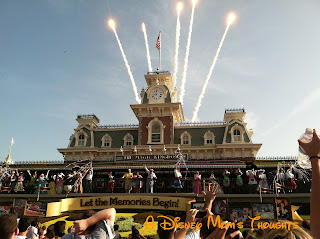 Welcome to day three of our youth WDW trip waaayyyyy back in July!  We all got up early and caught the bus to head to Magic Kingdom.  We arrived in plenty of time to watch the opening show complete with the Mayor of Main Street and lots of characters, singing, dancing and fireworks!  Once inside the park, Jonathan and I spent a lot of time on Main Street.  First, we met the Mayor and had a quick photo shoot with him!  Then he invited us to ride up Main Street to the castle in a Main St. vehicle (I really have no idea what the proper Disney name is for this car!).  It was so cool to do this with just my husband taking in all the sights, sounds and smells of Main Street! 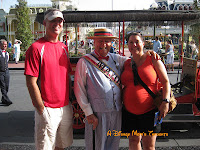 Once at Cinderella Castle, we stopped to take in the sights, take a few photos and start to make our way to Main Street Bakery for breakfast!  Of course I had the Main St Cinnamon Roll while hubby had the cheese, ham and egg croissant.  Being 32 weeks pregnant, this hit the spot!  Hanging out on Main Street with my feet in a chair and a sweet, hot, cinnamon roll in my tummy was magical.

Following a leisurely breakfast, we headed to the new Fantasyland.  At this point in time, only Dumbo, the train station and the Casey Jr Splash Pad were open.  After spending time in line for Dumbo and waiting in the kids interactive play area we finally rode the new Dumbo!  The double Dumbo was very different and I loved the water feature under the attraction.  While I do miss the "old" Dumbo behind the carousel, I love the look of the new one. 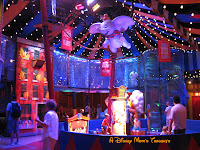 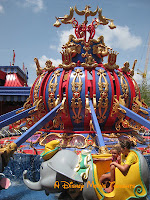 Next we started walking.  We had no agenda and took our time.  We walked through Adventureland, Frontierland and ended up in Liberty Square just in time for lunch!  We sat upstairs at Columbia Harbor House and enjoyed lunch, a large drink and air conditioning while having great conversations.  Once we were refreshed, we walked through "old" Fantasyland towards Tomorrowland.  Again, we took in a lot of sights, sounds and smells before finding ourselves on my favorite attraction- the Tomorrowland Transit Authority PeopleMover!  "Paging Mr. Morrow.  Mr. Tom Morrow."

While we were making our way back down Main Street USA, we stopped to listen to the Dapper Dan's sing and play.  I love the entertainment on Main Street.  This really is one of my favorite areas of Walt Disney World!  Once we were back down at City Hall, we met up with the youth.  Everyone checked in and let me know they were all OK!  At this point several youth went back to enjoy attractions while many stayed back with me.

We had plans to meet up with a guy from our hometown who works at WDW now.  He was scheduled to be in the Celebrate a Dream Come True Parade and had planned to meet with our group behind the scenes so we could meet several of his character friends.  You can read more about that experience here. 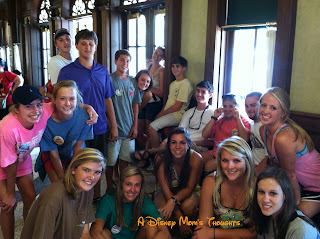 Once the parade was over, the rest of our group met us and we went back to Pop Century to relax and eat dinner.  Many of us took about an hour nap then ate dinner at the food court before heading back to Magic Kingdom.  The first thing we did was go to the castle for a large group picture... but the photopass guy failed to scan our card, so it didn't make it on our CD. :(  Luckily, I did take photos of each grade with my camera. 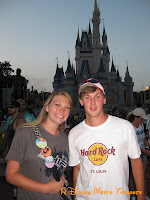 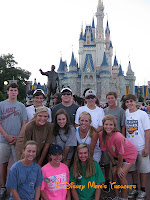 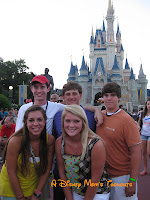 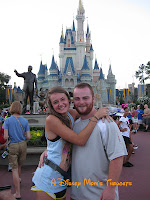 The park stayed open until 2:00am.  Majority of the group stayed til the park shut down.  I, on the other hand, headed back to Pop after Wishes!  I was so tired already and knew I had a 10+ hour drive ahead of me.

This was a fabulous, whirlwind trip!  I LOVED seeing my happy place with my youth and sharing that love with them.  However, it would have been so much better had I not been 32 weeks pregnant!  I spent quite a bit of time sitting on benches instead of running through the parks riding all the thrill rides.

Maybe one day (sooner than later) I'll get to take my youth back! :)