Welcome to those of you joining me from Disney Living and those of you just hopping aboard. I am the 3rd stop on our Magical Blogorail.

Best Character Interaction... that's pretty tough!  While my favorite characters are typically the fur (masked) characters, I love the interaction with the face characters.  Being able to carry on a real conversation with the characters is so fun.  I think the only exceptions to this rule is when I met Tweedledee & Tweedledum and Mr. Incredible.  Tweedledee & Tweedledum signed my autograph book then took my sunglasses off my head, put them on my nose and balanced the pen on top of the glasses.  When I laughed and tried to take the pen off, they put it back on.  They insisted we take the picture that way!  When I met Mr. Incredible once, we had a charades type conversation... apparently he doesn't know how many kids he has! :) 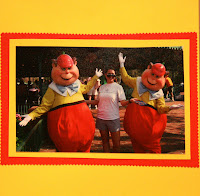 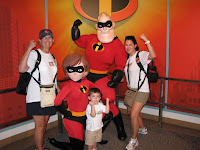 When push comes to shove, I really can't decide which character interraction is best: Snow White with JAG or Tiana and Naveen.  When we met Snow White in 2006, in Epcot.  She signed his book and had a small chat with us.  When we were saying goodbye, she addressed JAG as her prince and asked if she could kiss him (he was 5 at the time!).  Without missing a beat, he says "yes", puckers up his lips and leans in for the mouth kiss!  She laughed and said she would just kiss his cheek!

When we met Tiana and Naveen in 2010, I quickly had a new favorite prince and princess!  Maybe it's because they are southerners!!  I loved their accents and the questions Tiana asked- "Do you make you own clothes?"  "Do you like to cook?"  "Have you ever kissed a frog?"  But my favorite was when Naveen would talk, he would quickly look away every so often, even in the middle of a sentence, to ribbit! 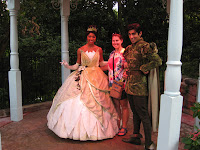 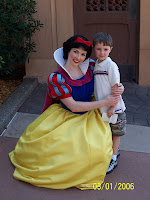 So there are my top 4, I guess, character interactions at WDW!  (you should know by now that I can't ever have ONE favorite or ONE best anything at Disney!)

1st Stop ~ Mouse on the Mind

Final Stop ~ Walt Disney World: Not Just for Kids
Posted by adisneymomsthoughts at 6:00 AM