Hubby and I were fortunate enough to eat at Epcot's Le Cellier in the Canada Pavilion to celebrate our 5 year anniversary.   What a treat!  We immediately had a new favorite restaurant.  While we did have ADRs for lunch, we still had to wait for about 20 minutes for a table.  Once we entered the front doors, we sat in the waiting area.  The hosts and hostesses were keeping us entertained by asking Canada trivia questions.  If you got it right, you "won" a Mickey sticker.  It was fun, educational and helped pass the time. I earned several stickers just because nobody else was willing to answer.  I guess they were all too old and "mature" for such childish games!  More stickers for me!! :) 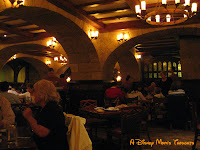 Le Cellier actually means "the cellar" which is appropriate since the stone restaurant seems to sit underground with no windows and many wine bottles are used in the decor.  The lighting is poor- again, no natural light.  Once we were seated we had a chance to look around the restaurant.  I quickly realized why we had to wait 20 minutes.  This place was pretty small!  I would guess there were about 40 tables and they were pretty close together.  At our table for 2, we could literally reach over and touch the table next to us.  It was a good thing we didn't want to have an intimate or private conversation!  The lighting and the close proximity of the tables were my only complaints about the place. 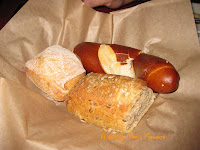 For starters we got a basket of breads.  The pretzel bread was a-maz-ing!  I was hoping we could get additional loaves to last the week!  But, I had heard great things about the meal, so I restrained from filling up on the bread. This was also the restaurant where I discovered my love for the pomegranate lemonade at WDW!  Being pregnant on this trip I couldn't indulge in the "adult beverages," but the pomegranate lemonade was delicious.  Hubby on the other hand fell in love with the Moose Head Pale Ale beer.  We learned that Le Cellier is the only place in the USA that carries this beer on tap.  You can find it in bottles, but nowhere else on tap! 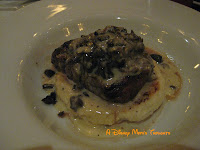 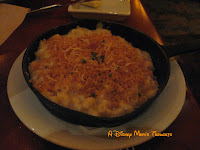 For dinner we both ordered the "Le Cellier Mushroom Filet Mignon."  The menu says it's a 8 oz. Canadian AAA Beef Tenderloin with wild mushroom risotto, white truffle butter sauce and Micro Chervil.  It sat on a bed of mashed potatoes.  This was the most tender, well cooked steak I'd ever had.  It literally melted in my mouth.  I don't even like mushrooms, but this was outstanding.  I don't think I would ever order anything else off this menu!  Hubby also ordered a side of the baked macaroni and cheese.  Since I don't eat cheese, I didn't try it, but he said it was good- just not as good as the steak! 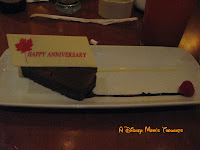 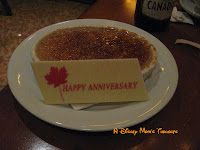 When I made our reservations I made a note that we were celebrating our anniversary.  We were pleasantly surprised when the waiter came out with our desserts that included a white chocolate rectangle that said "Happy Anniversary."  I ordered the chocolate cake with raspberry sauce and hubby ordered the Maple Créme Brulée.  Apparently the créme brulée is also a "must have" on the menu- along with the Canadian Cheddar Cheese Soup, Pretzel Bread, and Le Cellier Mushroom Filet Mignon.

Overall this was an outstanding choice for our anniversary lunch.  The food was outstanding and the service was great.  The waiter took the time to introduce herself to us and share a bit about the city and Province she calls home.  We had great food, great conversation and learned a bit about Canada in the process.  Each time we mention going back to Walt Disney World, hubby always brings up Le Cellier!
Posted by adisneymomsthoughts at 6:30 AM