Last weekend one of our best friends turned 4!  Miss LL had the best "Pirate & Princess Party!"  It was perfect for all of the 4 year old princesses and pirates in her life.  The weather turned out perfect for a day at the farm to celebrate a wonderful friend.  Here are a few pictures of the festivities.  (Sorry for the poor quality- I was using my phone, which doesn't take the best pictures.)


They had the cutest Pirate and Princess Cut outs for photos.  I did manage to get somewhat decent photos of my boys as pirates, I couldn't get either one to be a princess!

As the party started, you could choose which one you wanted to dress up as: Pirate or Princess!

To keep things "fair" we had to have both a Pirate and Princess Pinata to bust!

A precious game was a "Pin the Tail" type game where they had to put the kiss on the frog!  I don't think the boys even realized if they "kissed" right the frog would "become" a Prince! :)

The swingset outside was decked out with Pirate signs and Skull & Crossbones flags.  These three pirates loved playing "Jake and Hook!"

While one son was a cute pirate who only wanted to eat his foam sword, the other pirate was too serious and couldn't smile!

Every good Pirate (and Princess) likes to dig for buried treasure! 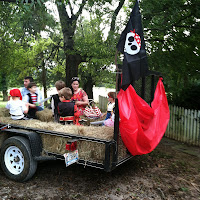 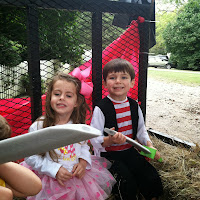 One of my favorite parts of the party was the "Pirate Ship" hay ride!

The food for this party was the cutest! There was a Pirate cake and Princess cupcakes.  The dining room table was divided in half- one side was pirate snacks and the other was princess snacks.

The favors were just as cute as the rest of the party!  Miss LL had her mom burn CDs with her favorite "Jake and the Neverland Pirates" songs along with 3 Princess songs and stories (Beauty & the Beast, The Little Mermaid and Brave).  They also made chocolate pirate ships and white chocolate princesses out of candy molds.  Needless to say, those didn't last long in our house!

Thanks for a wonderful party Miss LL!  Happy Birthday!  We love you and can't wait for the next one! :)
Posted by adisneymomsthoughts at 5:30 AM