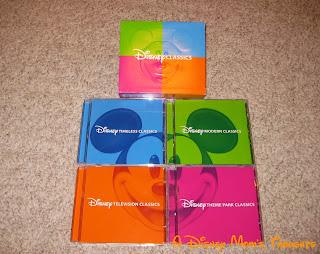 On November 12, Walt Disney Records released the all new Disney Classics Box Set.  This set features 94 original recordings from Disney and Disney-Pixar movies, Disney television shows and Disney theme parks which celebrate almost 90 years of Disney music.  I was fortunate enough to receive my own copy of this box set from Disney for review.

The "Modern Classics" feature 23 songs from the more recent Disney and Disney Pixar movies: The Little Mermaid, Toy Story 1, 2 & 3, A Bug's Life, Tangled, Pocahontas, The Lion King and more.  The "Timeless Classics" have 25 songs from the early Disney movies such as The Parent Trap, Mary Poppins, Pete's Dragon, Snow White and the Seven Dwarfs, Lady and the Tramp, Dumbo and more.  My favorite are the 21 songs from "Theme Park Classics."  This CD features songs from Splash Mountain, Space Mountain, Soarin' Over California, Food Rocks, Carousel of Progress, Fantasmic!, and more.  When I heard these songs, it instantly took me to my happy place!!  The last CD, "Television Classics" features 25 songs from old and new Disney shows such as Mickey Mouse March, Theme of Zorro, The Ballad of Davy Crocket, Gummi Bears Theme, Theme to Lizzie McGuire, Cheetah Sisters, What Time is It, Hot Dog! and more.  You can see a complete list of the songs over at The Disney Parks Blog.

"From the Studio’s earliest days, music has always been an integral part of the Disney creative process. But when ‘Who’s Afraid of the Big Bad Wolf’ debuted in 1933, it began a musical legacy that remains unmatched to this day – probably the most recognizable and beloved song catalog in the world. Even though the musical styles range from inspiring ballads, novelty songs, folk, rock, to Broadway show-tunes, Disney Music is a genre in and of itself."


Over the past few days, I have enjoyed sharing these songs with my youngest boys, ages 4 and 1.  We have been able to sing along with many songs we already know and we've started learning some new ones.  I've been able to introduce some 'new to the boys', yet 'old to me', Disney Classics to my boys.  It's so exciting to be able to listen to these songs and be instantly taken back to a special place in time.  That is just part of the Disney magic found through music! 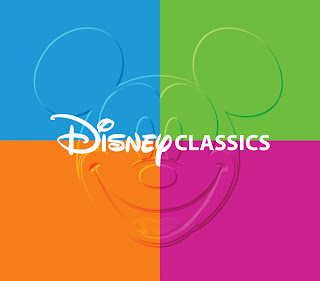 *I received the above mentioned CDs for review purposes through the Entertainment New Media Network, however all opinions are my own.
Posted by adisneymomsthoughts at 6:00 AM