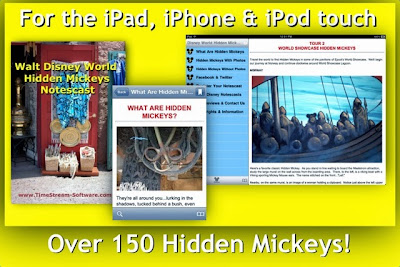 Recently I was given the Hidden Mickeys App for my iPad from TimeStream Software.  I got a new iPad for Christmas so I was so excited to get this new app!  This was the first app I was able to download onto my new "toy!"  All the other apps were ones I had for my iPhone.

This app was so easy to use and has some great features.  The app breaks down where the Hidden Mickey's are located by park, with and without photos.  After scrolling through all the photos in this app, it's amazing how many I've "seen" but never noticed.

I know on our next trip we'll definitely be using this app while we tour the parks and wait in lines.  There are so many found in this app and still more left in the parks for you to find on your own! 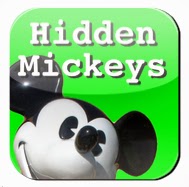 “Our Disney World Hidden Mickeys app is the #1 best-selling Hidden Mickeys guide with photos on the App Store.”, said Mike Westby of TimeStream Software. “And now we’re bringing it to the world of iPad users.”

“Disney Imagineers have cleverly hidden subtle references to Mickey Mouse and his friends all throughout Walt Disney world. Some are easy to find, while others are nearly impossible to see, even though they may be right in front of you.” continued Mike Westby. “Our new Disney World Hidden Mickeys 3.0 app unlocks these fun secrets for hours and hours of magical entertainment throughout the parks. It really does provide an all new way to experience Walt Disney World.”

TimeStream Software’s new Disney World Hidden Mickeys 3.0 does not require access to the web, but instead may be used anywhere throughout Walt Disney World Resort or at home.

Posted by adisneymomsthoughts at 2:12 PM