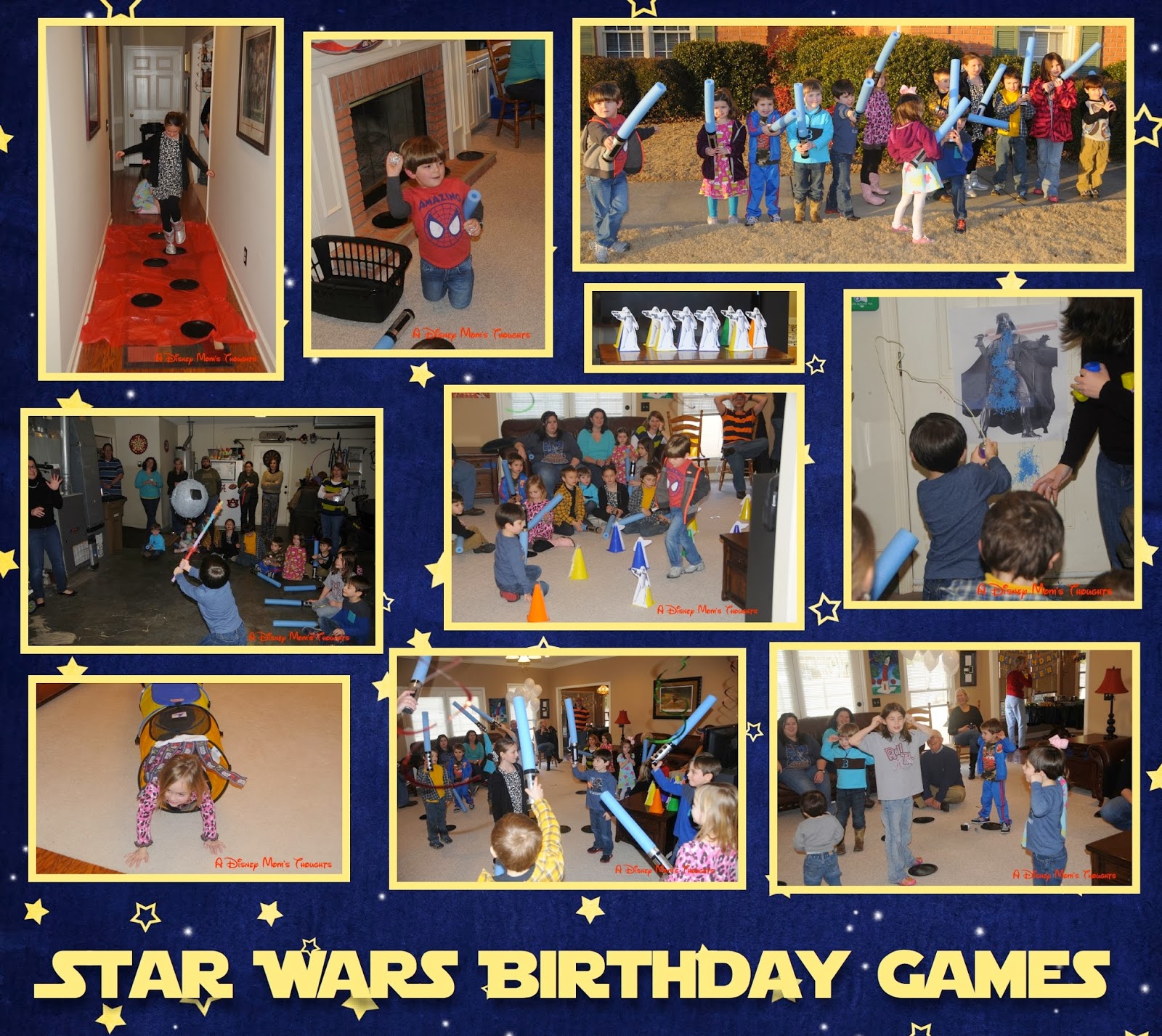 Most of my time planning my son's 5th Star Wars Birthday Party was spent on our activities and games.  We decided to have "Jedi Training Camp" as the main activity.  After the training, we had an obstacle course.  We had to have a "battle" with the Dark Side in the garage and ended out in the front yard having light saber fights!

learning to "use" a light saber

We began by doing stretches.  Each kid did toe touches, side twists, jumping jacks and the most important "Yoda Ear Pull."  Once each child was ready to go, we started "Light Saber Training."  We learned rules for using the Light Sabers: 1. no hitting people, furniture or electronics.  2. Light Sabers should only hit other light sabers.  3. Master Jedi (the adults) have the right to take away your Light Saber at any time if you aren't using it correctly!  Once we learned the rules, we started training- we learned the "A" and "V" strikes.  A strikes are high and V strikes are low.

if you look close, you can see the "Black Hole" behind the girl in the left picture!

The Jedi training course was next.  They started by running through a group of Storm Troopers (printed out, taped to cones).  They had to crawl through the Dagobah Cave (the tunnel).  {Honestly, I had/ have no idea what this means... I found it on Pinterest!}  They had to cross the hot lava (red table cloth) on stones (black paper plates) without falling in.  Finally, they had to throw a Star Fighter (frisbee with the star fighter picture on it) into the Black Hole (a black trash can). 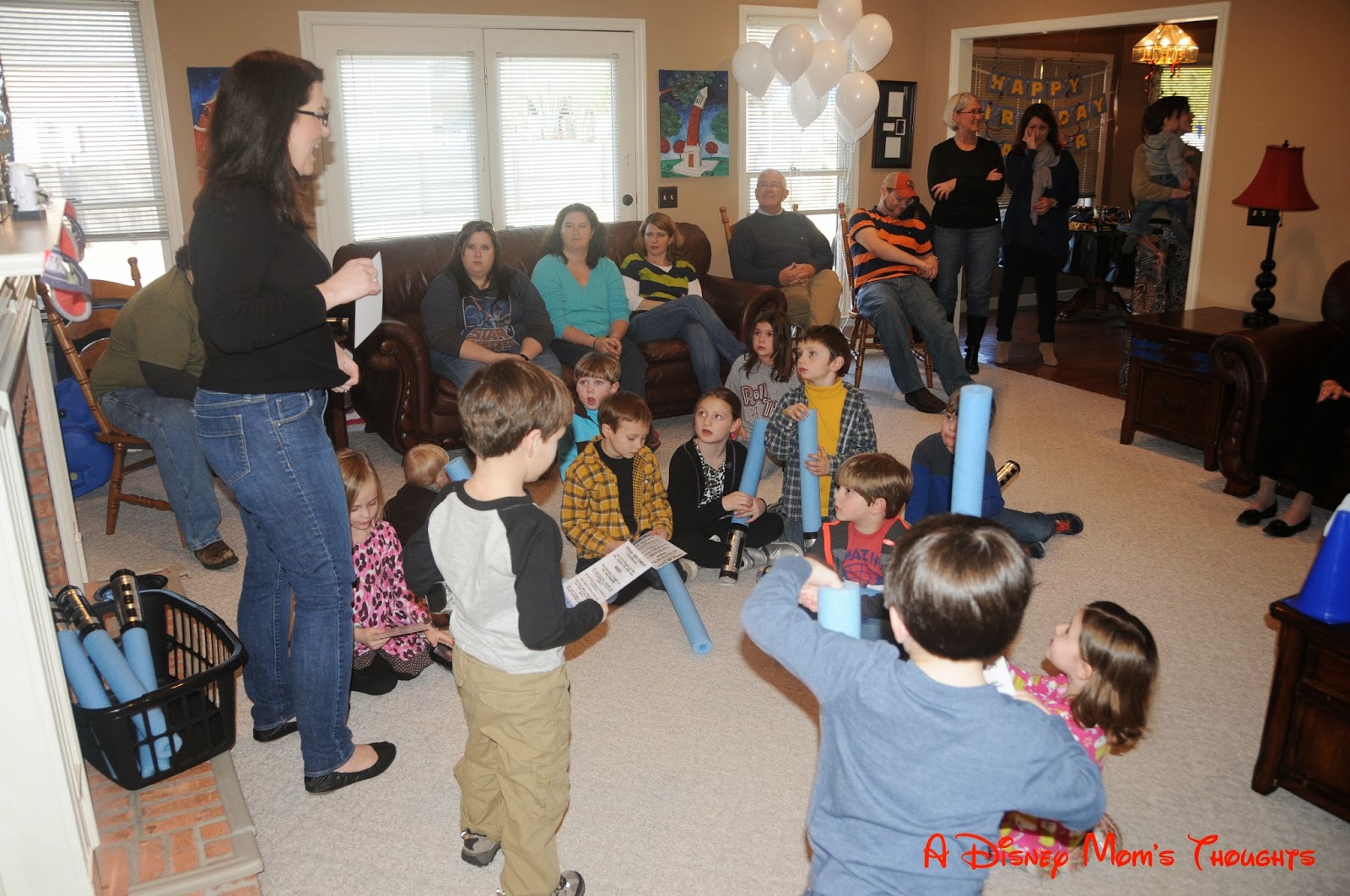 Following our Stretching and Training Course, the kids all received their Official Jedi Training Certificates!  They were all real Jedi now!  This meant they were ready to battle the Dark Side. (I don't even know if that's correct terminology!!  I've only seen the original Star Wars from 1977- and I didn't see that until the end of 2013!!) 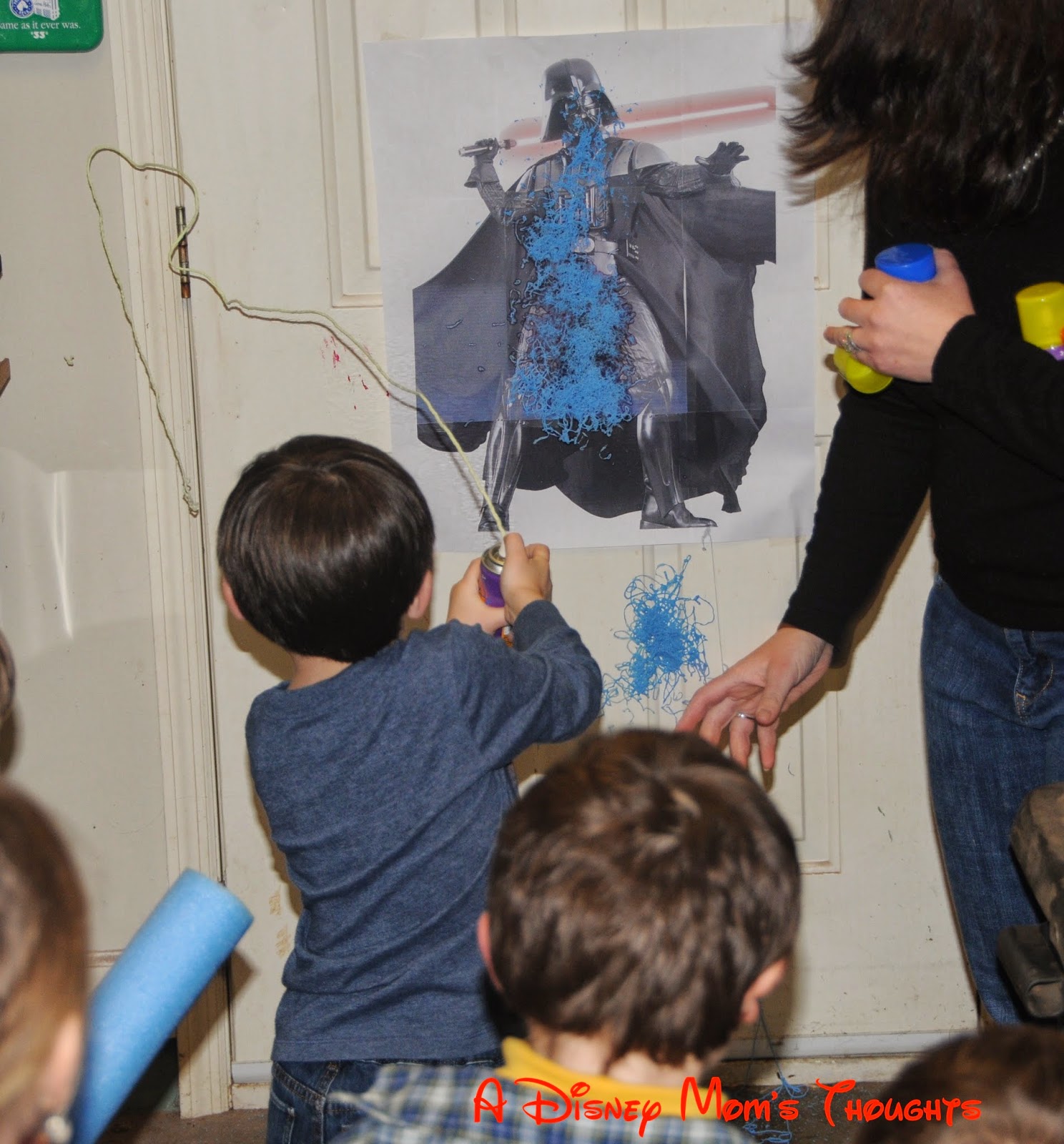 Since they were all Jedi now, we moved the party into the garage to find the Dark Side.   Dad made a great Death Star Pinata for us.  At the last minute, we decided to add this!  We bought a baseball pinata, spray painted it gray (several coats) and added some black duct tape to cover the hole where the candy went in.  Easy, peasy!  It may not look exactly like the Death Star, but it was perfect for a group of 5 year olds!  Then we went after Darth Vader with cans of Silly String!  Each kid had a chance to spray him with the silly string.  *Note to self: if I do this again, buy 1 can per kid!!! 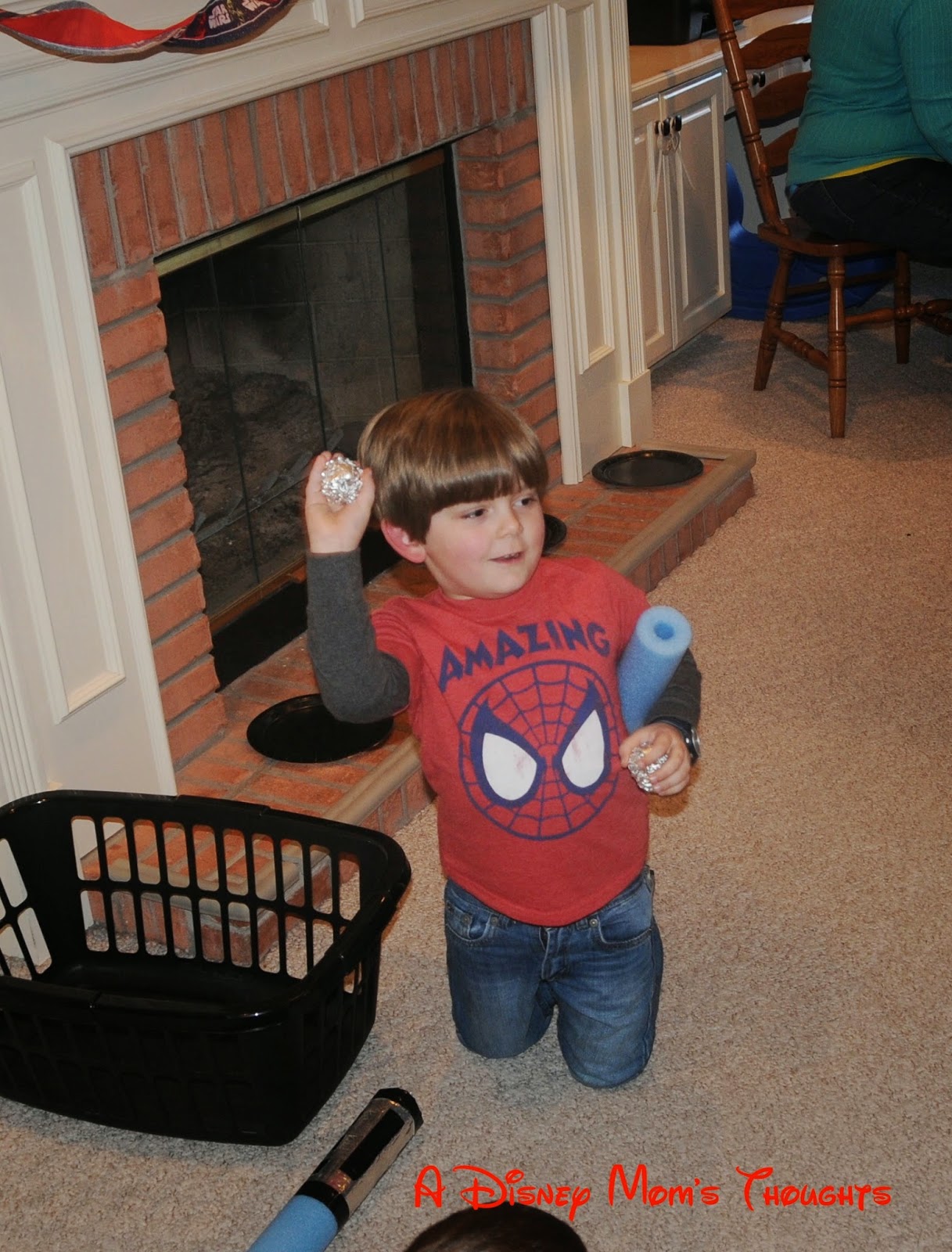 While we were out in the garage with the Dark Side, my parents hid "asteroids" around the den.  These were mini Easter eggs filled with rainbow Nerds candy then wrapped in aluminum foil.  Pretty easy and it filled time!  Each kid found one.  Then it was time to go outside to use the Light Sabers!  This was short lived since it was so cold!  The downside of having a January birthday... 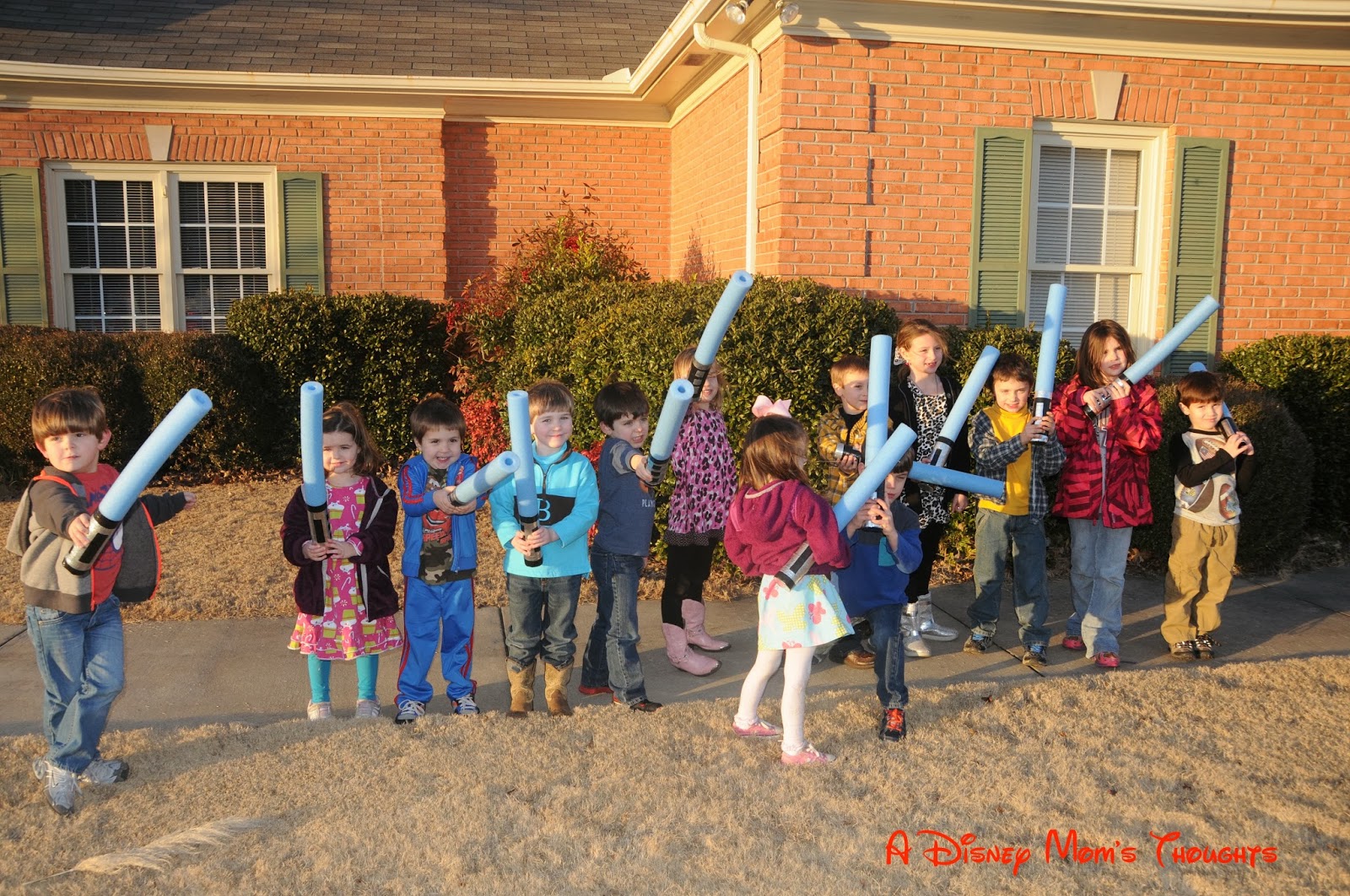